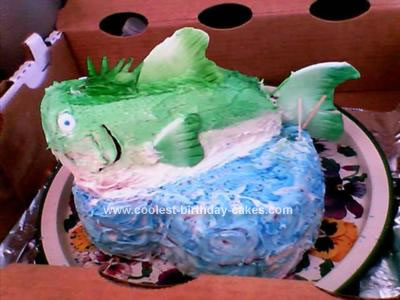 I made a double chocolate cake, shaped like a fish. I made this cake for my boyfriend’s 30th birthday. He loves fishing and earlier that month he caught a huge bass, which inspired me to make him a Bass homemade catch of the day fish cake.

I then cut the cake in half and staked it on top of it self, to make a smaller but taller cake. Then I used a knife to sculpt it into the shape of the fish. I frosted the cake in white frosting on a separate plate. I also used green pray frosting on the top half of the fish.

For the eyes and fins I cut out shapes from fondant and let them cook in the refrigerator. when they were cold enough to keep their shape, I sprayed them with the green frosting and positioned them on the cake.

An added tip: place wooden pegs through the fish and the bottom cake so it doesn’t move around. And if you are traveling with the cake keep any detail that will be standing up like the fins and put them on after you get to your destination. If the car is warm they will start to droop. Hope this helped bring out some creative thoughts! Good Luck!