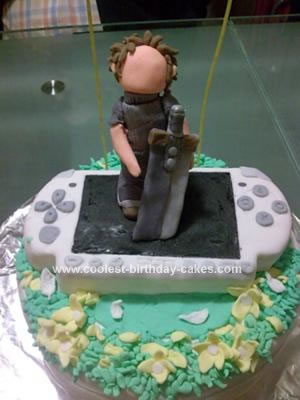 This Crisis Core PSP cake is the cake I made for my cousin’s 11th birthday party. Originally the idea came from his older brother that wanted to surprise him by giving a limited edition final fantasy crisis core PSP.

The base is a normal round cake covered with fondant. For the grass I used green food coloring and yellow for the flowers. I also made some white feathers that are also put on top of the grass along with the flowers. On top of the round base I cut out a PSP shaped cake and later covered it with white fondant icing.

For PSP buttons I mixed some food coloring to get Grey color and the screen is painted with black food coloring. This one take a long time to dry out.

Then I made the Zack figure and the sword and let it dry out overnight. Originally I was thinking to put a cut out photo of my cousin on the figure’s face. Unfortunately we can’t find any that will fit. So I have to leave it with no face at the end.