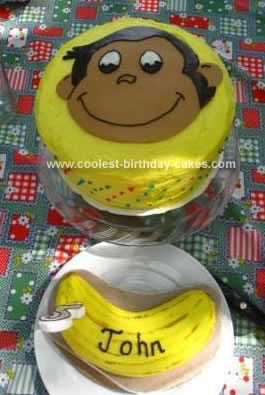 I got inspiration for this Curious George Birthday Cake from a few cakes on this site. I used two box mixes of yellow cake mix, one was split between two 9″ rounds, one box was split between on 9″ round, and one bread pan (this one took longer than the round).

For the main cake, I used the three rounds, that were torted (split) with a cream cheese ganache. (1 c whipping cream, 1 cup choc chips, 2 Tbls cream cheese; heat cream, pour over chips, let sit, whip both with cream cheese till fluffy). Frosted cake with “Lucious Buttercream” recipe on allrecipes.com (that is such a yummy one!), tinted with yellow for both main and banana cake (leave a small amount white for eyes.

To make the face, drew out a picture of George, traced over with black marker, took piece of wax paper and traced over outline. Took 1/4 package of white fondant added brown food coloring to it, rolled out flat. Took wax paper and used toothpick to trace outline of face. Cut out face with paring knife and colored fur with undiluted brown food coloring (used a clean paint brush). Traced around outlines with black and filled in eyes with remaining white frosting. Put the face in fridge to dry, then lay on cake. Used red, blue, green gel to make dots on side of cake.

For the banana (my son’s cake to eat), I cut the cake I baked in the bread pan into a banana, frosted it with the yellow. Then took the brown food coloring and paintbrush, I used a bit of water to dilute the brown a bit and brushed it on certain edges of the banana and the ends to further make it look banana-ish.