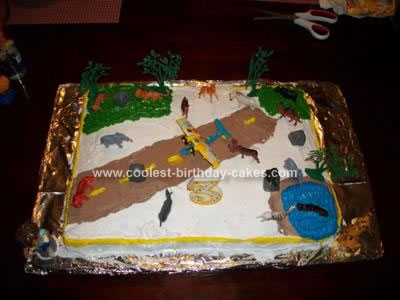 My son was turning 3 and he just loves Diego… my mom had found all the figures at Kmart and I chose all my colors for the icing.

For this homemade Diego scene cake I started with two rectangle cakes… one side was butter recipe and the other side was chocolate… I bought professional buttercream icing and iced the entire cake in white icing. I had the tube icings in the colors yellow, blue, and green.

I made the airplane tarmac by mixing buttercream and chocolate icing to make it light brown… I took the green icing with the grass tip and made two grassy areas, I took the blue icing and made a watering hole… the figurines that we found included all the animals that Diego rescues and takes care of, trees, rocks, and we picked up some airplanes.

If there is anything else you would like to know about this cake… feel free to comment or email me at BLashaO21[at]gmail.com… Thanks!!