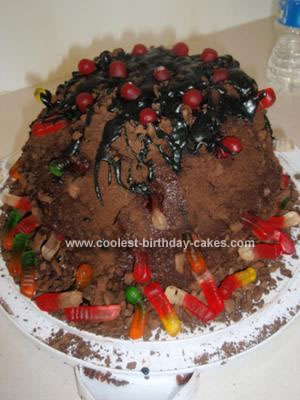 I was on a quest for a Max & Ruby cake for my son’s 3rd birthday. He loved the idea of the “dirt” cake that Max and Ruby made in one episode. I found a picture from the episode and took a picture of it, so I could look at the picture that I had printed while making the cake. The best part making this Earthworm Dirt Cake, was that Max, who’s the three year old bunny, made it. So, I figured there’s no screwing it up!

I baked three cakes. All in milk-chocolate flavoring. Two 9″ rounds and one bundt pan. When cooled, I stuck them together with marshmallow creme – the stickiness was SUPER helpful, especially as I started carving to really make it look like a “hill.” Anything that needed to be stacked back on, the creme made it happen.

For the frosting -I made the chocolate pudding as directed except I reduced the amount of milk from 6 cups to 4 cups, which made it nice and thick so it would stick to the cake like frosting. Put it in the fridge to keep it nice and thick.

Then cover the cake with the chocolate graham cracker crumbs or chocolate animal crackers. This is going to be messy because you are going to have to throw the crumbs to the sides of the cake. It’ll stick to the pudding easily.

Poke holes into the cake using chopsticks. I had to poke then dig around to make the hole big enough for the gummy worms to fit. Push the worms into the holes.

I made the caterpillar icing by melting 2 tablespoons of butter in a pan then stirred in 1 cup of confectioner’s sugar then I added 1 1/2 tablespoons of water and 2 drops of green and black food dye. After it cooled for a few minutes, I drizzled it over the cake. I probably used half of the icing.

Top it off with a few red Dots candies and voila, you have Max’s earthworm cake!