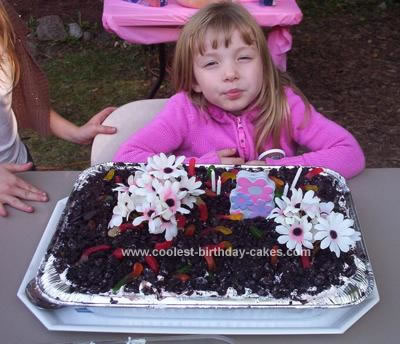 I made this Mud Birthday Cake for my daughter’s 5th birthday. My daughter is fearless when it comes to creepy crawling bugs. If she spots a worm she’ll pick it up, pet it, name it, make it a house and carry it around all day.

I made it for a party of 40, so depending on how many guests you’ll be having you’ll have to figure out how much of what to buy. Which isn’t very had.

The main ingredients are Oreo cookies, instant chocolate pudding, cool whip and gummy worms to stick on the top. Start off by making the instant pudding as directed on the box. Set that to the side. Then put a bunch of Oreo cookies in a gallon size Ziploc bag, seal it, set it on the floor and crush them with you feet. (This was my daughter’s favorite part)

The flowers on the cake I bought at the dollar store, they’re plastic! I think it adds that girly touch!