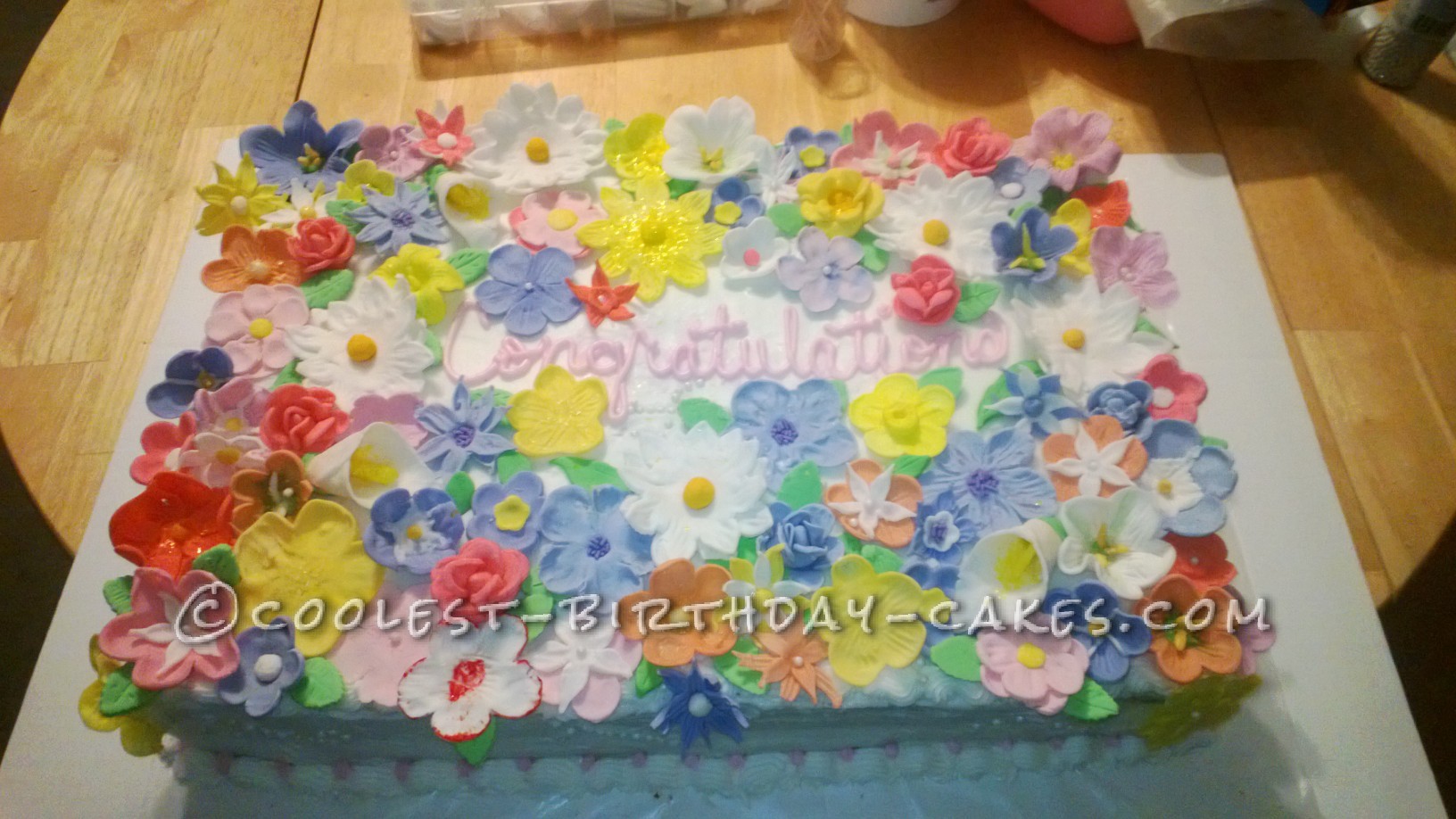 This was a cake I did for a college graduation. I was very worried about this particular one because the lady I made it for was a friend of a friend that had gotten my name from her grandmother but that I did not know personally. She had a lot of “wishes” for this cake and not being a professional, I was apprehensive about accepting the “job”.  She gave me instruction that she wanted a dense cake covered with spring flowers that looked feminine.

So, I had to do a little research.  I had always just followed the box recipe substituting milk for water but those cakes were more the moist type.  After some research, I found that adding a box of pudding to the cake mix would help make it dense. She requested a butter yellow. I mixed two boxes of cake mixes, doubled the recipe and added a box of pudding. I then baked the cake using the largest cake pan that I had. This was the bottom layer.

I then repeated the above to make the second layer. I separated the layers with a thin covering of homemade butter cream icing. After the cakes had cooled I crumb coated the entire cake and sat it aside covered with wax paper. Then I placed it in the freezer. The flowers were all fondant and gum paste so I had to research how to make those, too. After working three nights on flowers, they were ready to be placed on the cake. I knew that butter cream could breakdown fondant so I didn’t want to place them on too early.

The night before delivery, I removed the cake from the freezer and put a final coat of butter cream on the cake and a boarder. Then I carefully put each flower on the cake so that each could be seen. “Congratulations” was the only wording that the lady requested on the cake so I wrote it in the middle and used the edible beads to outline the writing. The bigger flowers were put on the corners and the body of the cake was filled in with smaller flowers. The day of delivery it was pouring down rain and I was unsure where I was going. I drove around the college three times before finding my destination.

Standing under an umbrella with the trunk lid open, I opened the cake box and showed the lady her cake. The reaction I received was very rewarding. She loved it. She later sent me a text saying everyone loved the cake and that she believed more pictures were taken of the cake than the graduate. I was very pleased that I had been able to create a cake she had envisioned especially since this was my first attempt making fondant flowers.