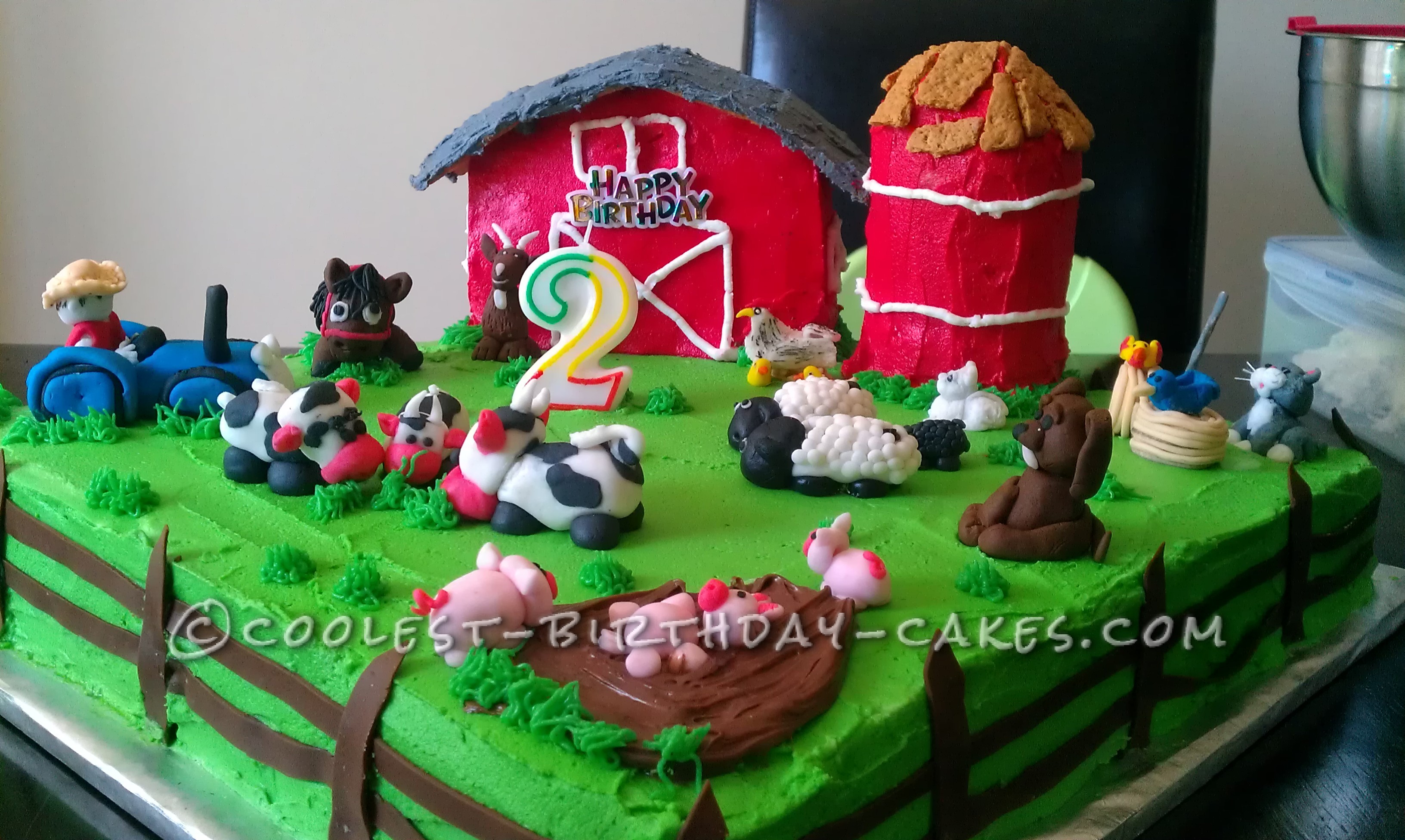 What a week, I decided that making a farm themed cake for my grandson’s 2nd birthday would not only be fun but easy. Needless to say, farming is not to be taken lightly! I started with what I thought was the beginning, the design. I researched, YouTubed, and made drawings til I was pleased with the layout. Then there was the discussion with my grandson as to what animals would be on the farm, he turned to me and said “two’s Gramma, two’s lellow cows”. It took twenty minutes to convince him that cows were not yellow. I realized this could be a drawn out process so mom and I decided what other animals to include.

I made a large sheet cake and covered it with green butter cream for the grass. I then rolled out chocolate fondant and cut it for the fence. I placed it around the cake which gave me the entire top for the barn, silo and animals. Now came the molding and shaping of animals. First was the horse, he was quite easy and gave me the courage to continue. The sheep were quite easy as well, then I hit the wall , it was in the form of a cat! I thought I had made the cutest cat, showed it to my family who happily replied.” aww what a cute doggie”! Back to the fondant. I managed to find a tutorial on making a cat and had great success the next time. The other animals were fairly easy, I did have to redo the pigs, something else I thought would be easy!

The tractor… my Grandson wanted a blue tractor, so that’s what I gave him. I had never made a vehicle so this was a first. I was kinda proud it looked pretty good. I even gave the farmer a straw hat and curled it up at the ears so he looked cool! haha. They looked good til….I get up the next morning thrilled with how things were going only to find all four tires on the tractor were flat! The fondant was to soft, what to do, so I removed the tires and put them in the fridge. Hard, they were hard, I was thrilled. Ya, that lasted til they warmed up. Remember, I have never done this before. So the only thing I could come up with was to pipe grass at the base of the tires so no one would notice, it worked. My brain was doing cartwheels trying to figure things out.

The barn and silo were next, stacking cakes are a challenge for me. I used doweling but they still wobbled and threatened to fall.So my husband put a wedge of cake at the back and bottom of the barn and the silo, it helped so much. He made me promise to never try and build a house for anyone though, how rude!

I then coated the barn and silo in butter cream and finished the detailed work. The whole cake, animals and all took around four days to complete. Although I struggled with different parts of this I would gladly do it again. Not only was it a great learning experience, it was so worth it to see the look on my grandson’s face. He was thrilled.

I love my grandson with all my heart and put that love into this cake for my little man. 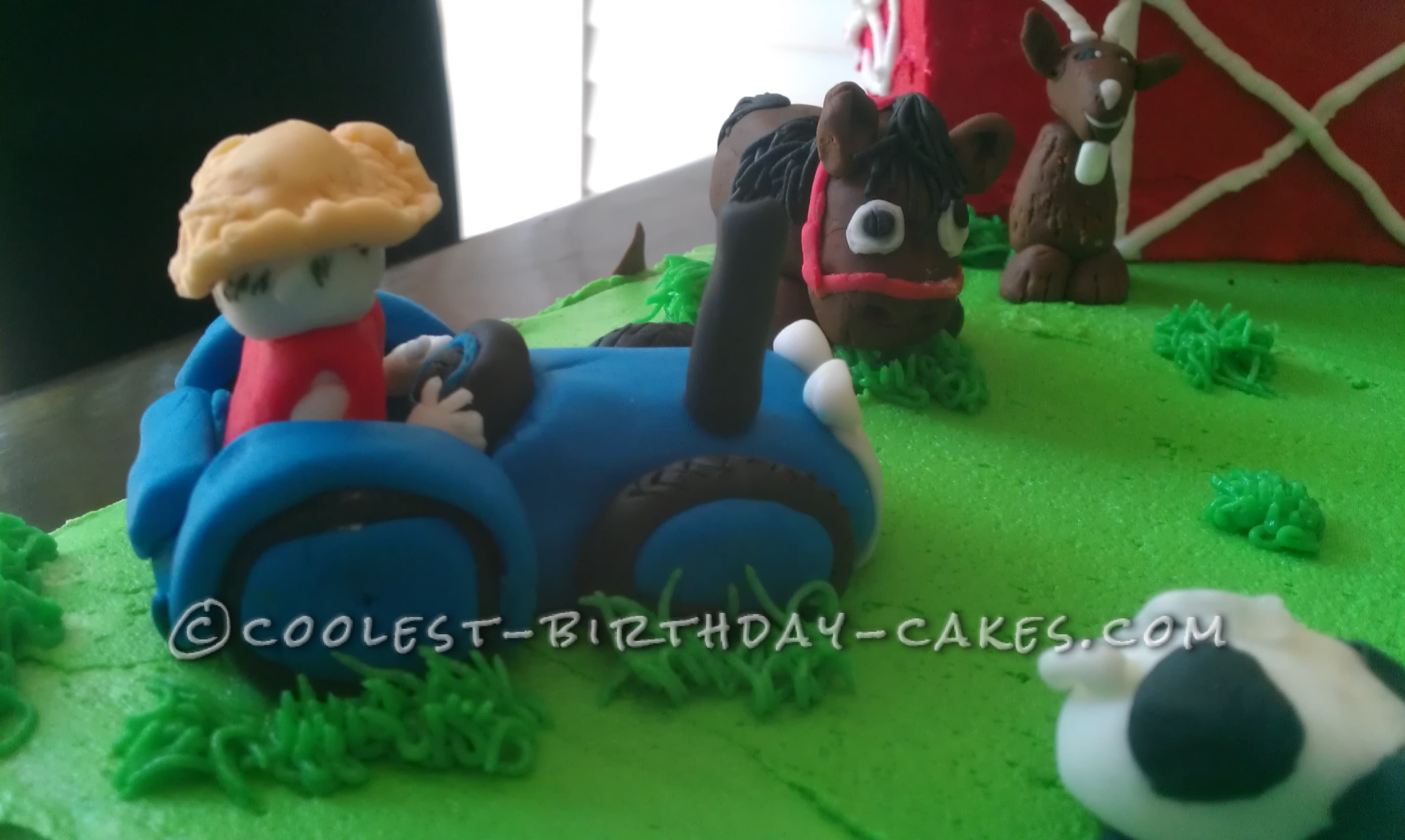 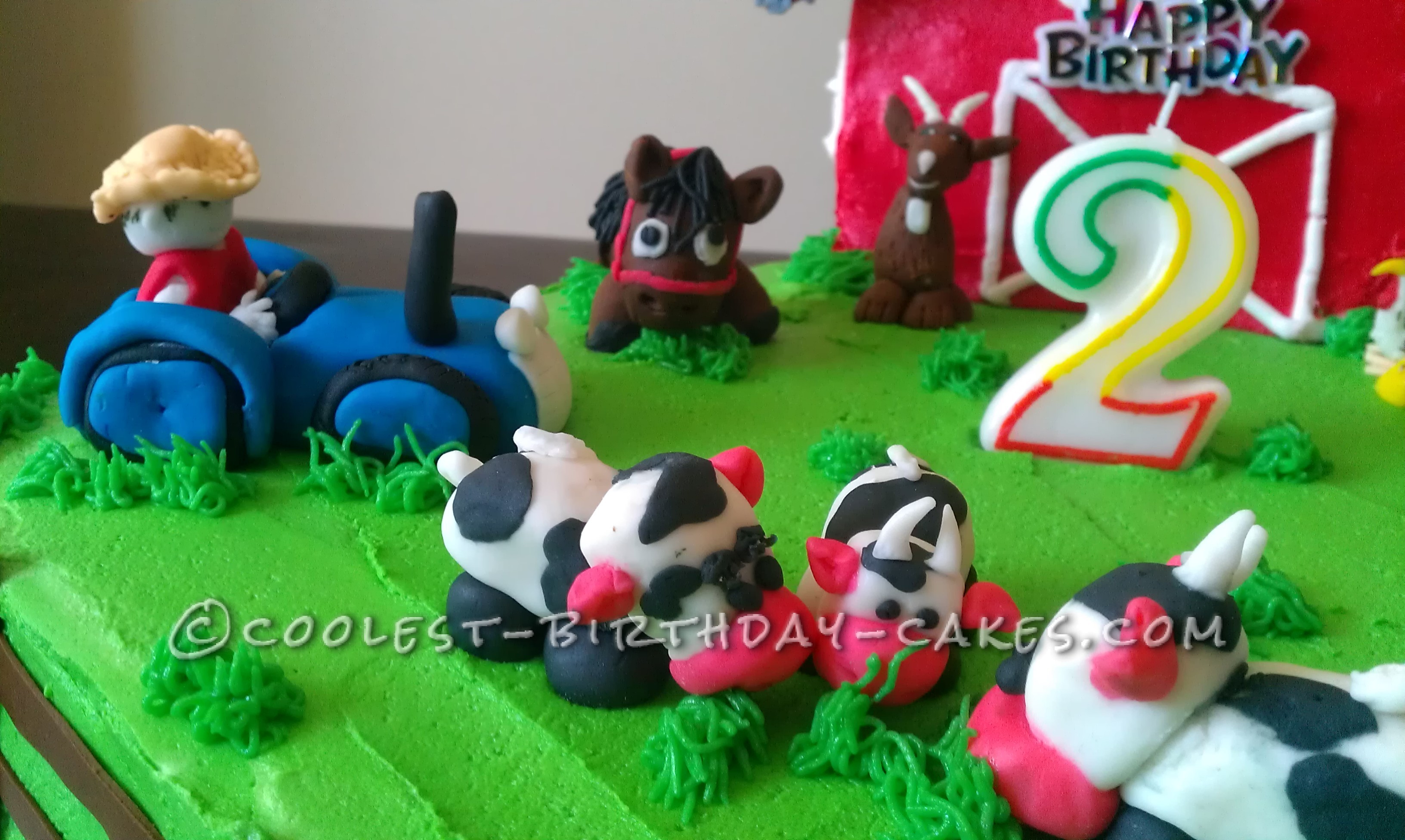 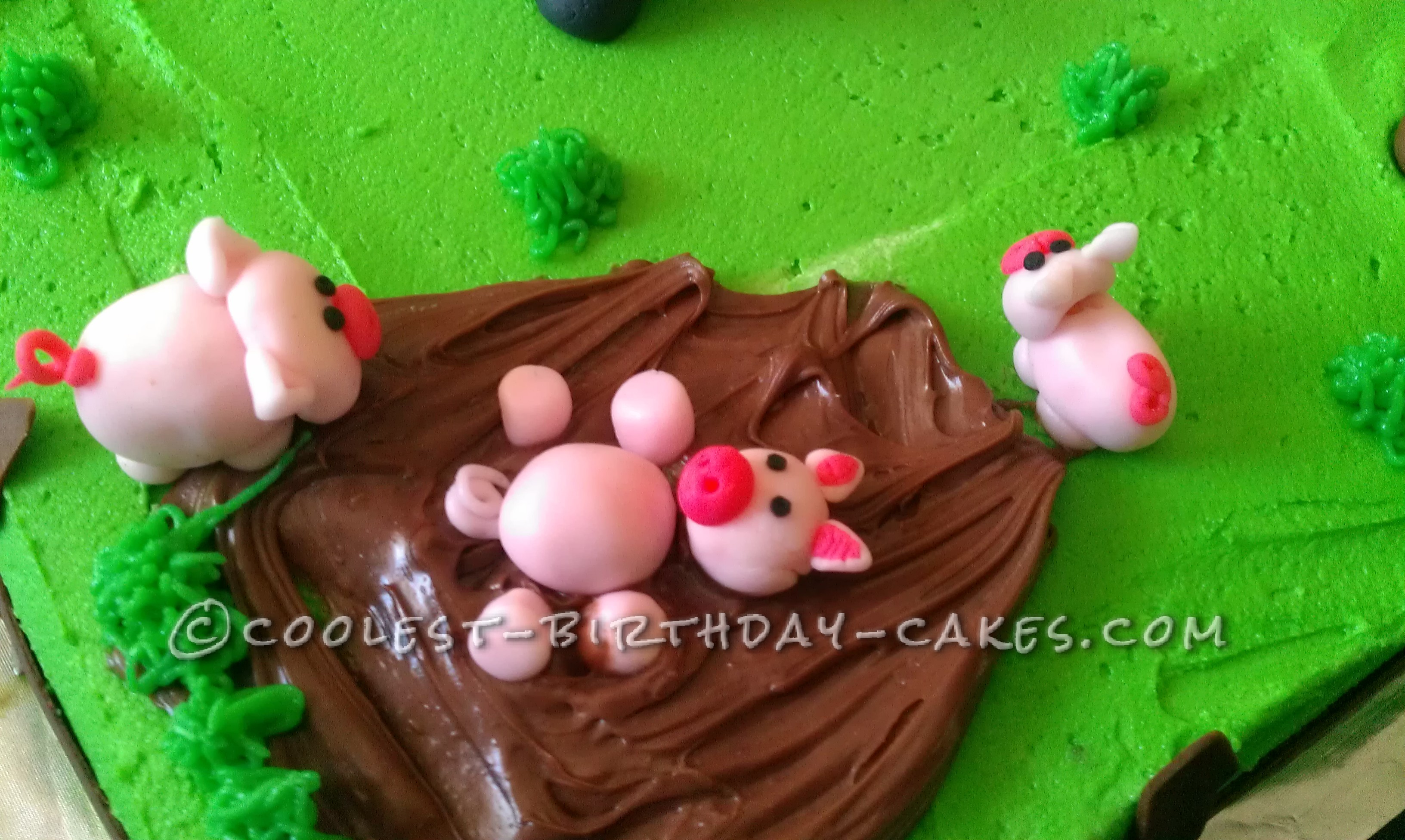 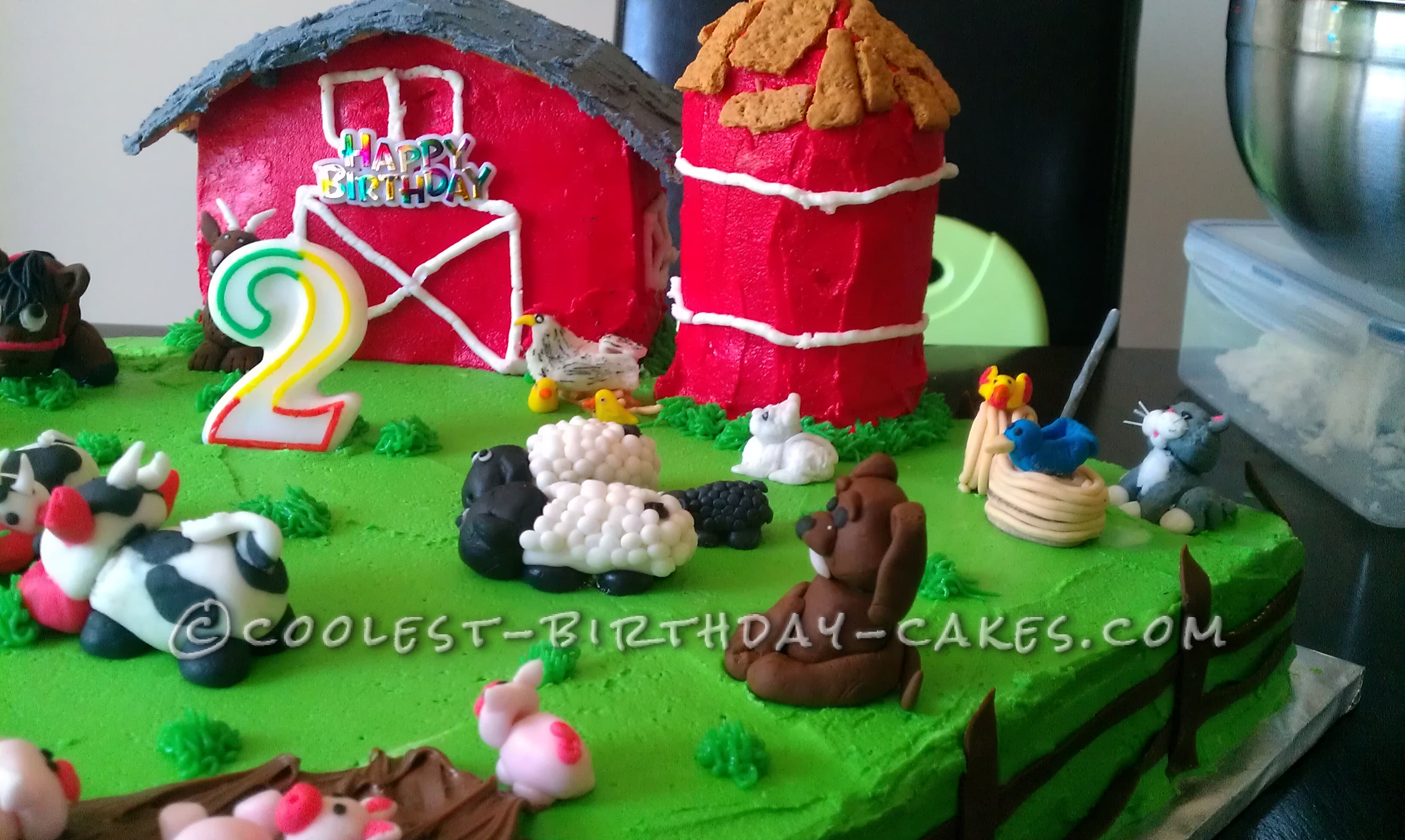