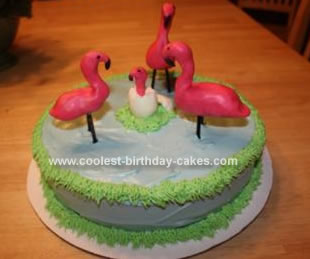 I made this Flamingo cake for a friend who was having her second child. The shower theme was flamingos. I usually get my cake ideas online but I couldn’t find any flamingo cakes I liked. Before falling asleep this idea hit me. A few days before making this cake, I used the Wilton recipe for molding candy and melted down pink candy melts and then mixed the mixture with pink coloring gel.

Once the candy set over night I shaped the candy into 3 slightly different sized flamingos and shaped a smaller flamingo that was only the head and neck. I used a picture of flamingos I found online to help with shaping them correctly. I used the white candy melts and made an egg which I then cut off the top of the egg and shaped the egg pieces to look as if the egg was hatching.

Using the 4 inch lolly pop sticks I inserted one into the baby flamingo’s neck and inserted this into the egg. I broke 2 of the sticks in half and used them in the other 3 flamingos necks to support them on the bodies. Using 6 more sticks, I laid them on wax paper and painted them with black icing gel. Be careful because the gel will not dry, it will remain sticky and you may end up with stained fingers.

I left a small part of the stick on the bottom unpainted. I then inserted 2 sticks into each flamingo as legs. Also using the black gel, I painted the beaks. Then using a toothpick dipped in the black gel, I gently poked the toothpick one the side of each head to make the eyes. I left them in the fridge until the cake was ready.

To keep the flamingos upright, I placed each one in its own juice glass. I baked a 10 inch round cake and frosted the cake in blue buttercream icing. This was an easy cake to frost because the frosting did not have to be smoothed out. I wanted the frosting to have the ripple effect of water. I used the grass icing tip and green buttercream frosting mixed with a small amount of shortening (the frosting will keep its shape) and went around the top and bottom of the cake for grass trim.