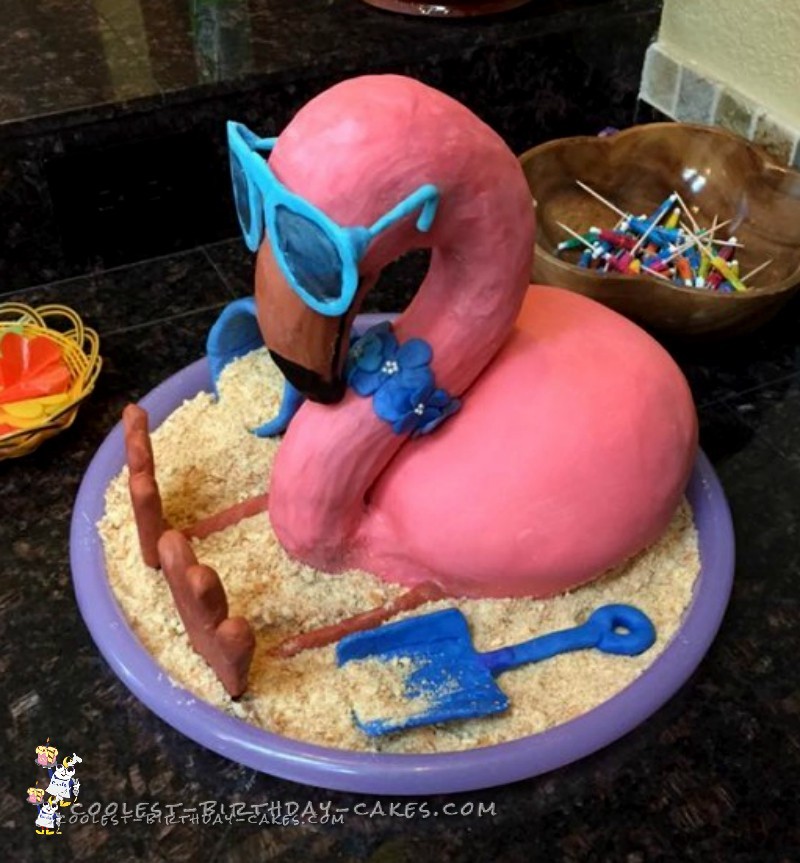 I have decorated many cakes, and almost every time I learn something new. But this Flamingo birthday cake was probably the most outside my comfort zone I’ve ever gone.

When my friend wanted to do something fun for her 30th, we did some brainstorming and decided a luau theme would be awesome. I volunteered to do the cake and her only request was that a flamingo be on it.

I began by looking at other peoples cakes, and there were a LOT of great ones for inspiration. Initially I was planning a flat cake covered in fondant with hand painting. I have hand painted on fondant with great success in the past and the results were beautiful.

That decision led me to looking up flamingo toppers, so I could get an idea of the shape and size. And THAT in turn led me to my “ah-ha” moment… an adorable, cartoon flamingo cake topper in sunglasses and a lei. It had a very rounded body and simple details, but I looked at it and thought to myself, “You know, this would make a terrific cake!”

With that image firmly in mind I looked up what I would need to make my creation a reality.

The flamingo had an almost balloon like body, so I knew I wanted a ball shaped cake. Now, I have the Wilton ball pan but this wouldn’t be enough to feed even half the invited guests. I considered stacking several regular sized cakes and carving them, but was worried about too many layers being unstable. So, I considered other options, and I’m glad I did.

I  pondered what else could make a half-circle shape, so I’d have less pieces to stack and more stability. In the end I used two Pyrex glass mixing bowls that are oven safe with a dense white cake able to hold up the weight and unusual shape.

With the CAKE part done, that left me with the head/neck construction, and how I would cover the entire thing.

I had seen sculpted Rice Krispies treat add-ons for cakes, so I looked up a few tutorials.

Knowing it needed something to help hold it up, I wanted to make a wire armature, but ended up having to improvise by taking a long length of tin foil and compressing it, and then making a vague S shape with only a hint of the details to come (head bulge, beak). If I were to do this again I would look for a sturdier wire, as this was almost not strong enough to hold the weight of the head once assembled.

I added my rice cereal marshmallow mix over my head piece and pressed it together firmly and gave it a more defined shape, being sure to make it smaller than needed as once it was fully decorated it would look larger.

I couldn’t get the modeling chocolate out of my mind, as I had read it could be used for covering parts of cake and I have a firm dislike of fondant. It can look gorgeous, but I’ve always found it a pain to work with as it can dry out and look cracked if I don’t work fast enough and literally nobody I know likes the way it tastes.

At this point I decided I was done, and the party was the next day. I left “Floyd” (as he’d been dubbed) sitting on the counter and walked away at 10 pm.

Around 1 am, I happened to pass through the kitchen to get water, and I was HORRIFIED. Floyd’s head was apparently just TOO heavy and the weight had pulled it down slightly, making a huge crack on the top curve of the neck. It didn’t seem to be breaking any more so I took a deep breath and… rolled with it.

I still had some pink scrap, so I did the same thing I did when hiding my seams. I rolled some ropes out, pressed it into the crack, and smoothed it with a spoon. If you hadn’t known how it looked before you’d never realize something happened.

By this time, I was too keyed up to sleep and I had all this leftover blue and purple clay so decided to make Floyd some terrific beach accessories. I mixed my purple and blue (not fully, but enough to get a pretty subtle marbled effect). I took some cling wrap and put it about half way up a bottle, then made him a pail, and a matching shovel for the “beach”.

On the day of the party, Floyd transported very well but was still missing legs. I put him, on his cake board, and into the larger tray where he’d spend the party.

I then pushed the bottom of the feet onto the tray, and took that orange I mentioned earlier, and built him some new legs by simply rolling out a couple thick ropes, and then pressing them down securely.

All the messy bottom edges? No problem. Those were covered up with “sand” made from vanilla cookies crushed up and dumped in the tray… and inside Floyd’s lovely pail. Now you know what the beach toys were for!

All in all, this was a huge stretch for me. I learned so much, very little of what I did was like anything I’d done before. New cake recipe. New decorating techniques. New style of cake.

The cake was a HUGE success!

When someone walked in and asked, “Where’s the cake?” because the cake looked like another decoration, I was over the moon. There may never be another Floyd, but I will absolutely be using these techniques on future cakes, and I am so glad I challenged myself. 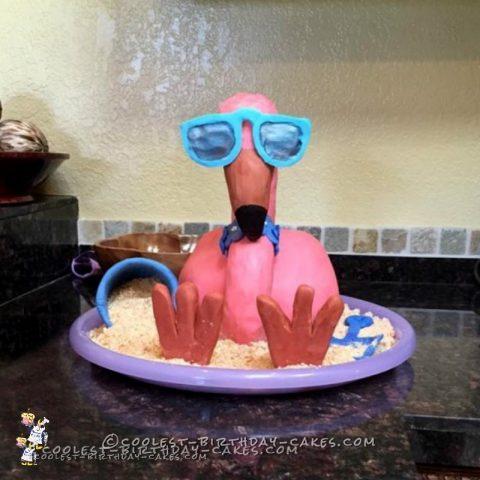 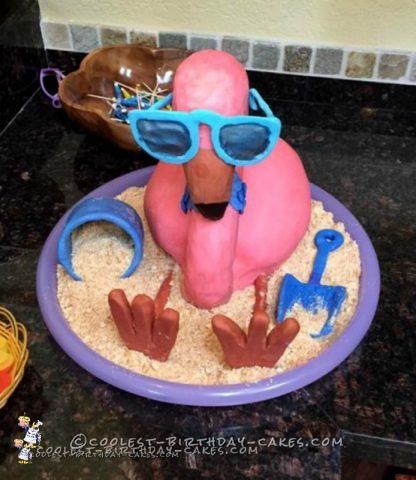 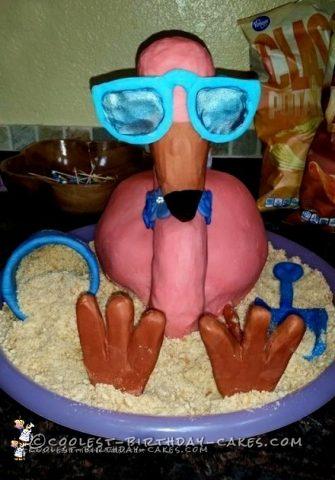