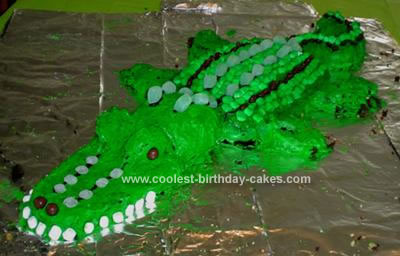 This Gator Birthday Cake is my first cake of this sort. It used 3 cake mixes and 3 icing recipes. It did not require fancy icing tools or prior experience to put on the icing. The ingredients were around $30, but it was over 2 feet long.

The cake was baked in a large rectangle ceramic pan (body), a bundt pan (eyes and tail), a glass bowl (head) and an oval ceramic pan (snout/mouth). The bundt and bowl shapes were only half full. This made them the same height as the others.

I mixed 3 icing recipes separately. Then, they were combined as the color was added. If I remember correctly, it was the royal icing with a 1/4 teaspoon of cream of tarter (to make it stiffer). This project needed another 1/2 recipe of icing, but it worked out.

A friend recommended that I put on a thin icing lay first. After the first layer dries, then put on the final layer. This was to hold the crumbs within the bottom layer. However, I didn’t have enough time or icing for this step. With an alligator, the skin should be rough and crumbs actually helped the appearance.

After the green icing, white marshmallows were put on first and painted with colormate decorative color spray (for cakes and cupcakes). Then, other candies were added.

My kids enjoyed participating in this project. Fortunately, the subject was forgiving and came out better than expected.

The cake pieces were baked the day before and refrigerated. The icing and final assembly were completed the morning of the party, since it was too large to fit in the frig or be covered.

Thank you cool birthday cakes.com for the inspiration. Best wishes.