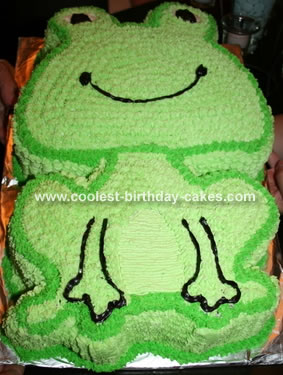 I wanted to make a frog cake for my son’s first birthday. I had decided on a frog because of my love for lime green. I tried to find a frog cake pan to no avail, so I decided I would have to carve one. I found a frog I loved on one of his outfits and drew a large two piece template free hand onto paper cut to the size of a 9×13 pan.

I was originally going to do a single layer of cake for each the body and the head, but worried that once I cut the shape out I would not have enough cake to feed all 15 of us. So I decided to have a two layer cake, so a total of 4 9x13in cakes. I made the head a yellow cake and the body a chocolate cake because I new that our group was going to be split down the middle. I made the cakes from Betty Crocker cake mixes, the cake was very most and delicious however, because it was so moist it was very difficult to work with. The next time I make a cake like this I will need to find a more solid cake to work with.

In the end you would never know that I had trouble with the cakes, as icing covers all.

Once I had spread icing between the layers I laid my template on top to cut around with a large serrated bread knife. The eyes were the corner pieces of the head moved and rounded out, I adhered them with icing. Because the eyes were corner pieces and there for thinner than the middle of the cake, I had to increase the amount of icing between the layers to raise the height.

With the crumb coat done I then made a double batch of icing. I added green and yellow food coloring gell until I got the bright green I was looking for. I then drew, with a toothpick, a light sketch of the line for my darker border one star wide, which I would come back a do at the end, and the markings for the front legs and tummy.

For the eyes I pressed a light circle with a round measuring tablespoon. I filled a pastry bag and started with a small round tip do do the belly. I then switched to a star tip and began along the inside of the border line I had drawn. I worked around the shaped as apposed to going back and forth in a line.

Once the whole top was complete with the light green icing, I moved to the sides. Starting in the space between the head and the body I worked my way out as to not mar anything that had green icing. I made my stars in a line straight up working from bottom to top. I did this around the entire cake.

When I was complete with the light green I moved on to the dark green outline. I pulled the left over icing from earlier out of the fridge, rewhipped it, and added green, yellow, and a little blue until I had a darker shade of green that was more yellow than blue. I then piped the stars for the border adjusting the size of the star to accommodate the slight variation in the amount of white space to fill. After doing the border I then piped one row of stars at the bottom where the cake met the foiled board.

When I had completed the dark green it was time for the finishing touches. I knew I wold not be able easily make black icing so I bought a can of pre-dyed decorators icing, the kind that has the tips that fit on the end. Because it is difficult to control the can of icing I squirted the icing from the can into a pastry bag. I first piped the outline for legs and toes and then did the smile. For the eyes I left the smooth white of the crumb coat showing and then drew an oblong iris and filled it in.

And presto! the cake is complete. It was time consuming but so well worth it! Everyone loved it.