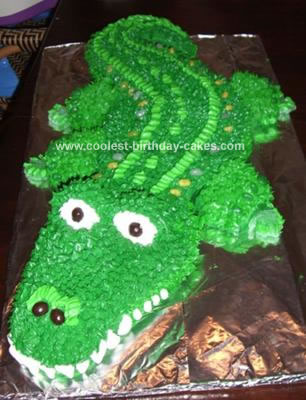 This Gator Birthday Cake was not as difficult as I thought it would be considering I haven’t baked a cake in over 30 years. It was easy since the night before baking it, I drew up a template on sketch paper in the actual cake size that I wanted but it still took 5 hours to make. It made it SO MUCH easier to do and my cake turned out exactly as I imagined it, with no trouble at all.

It fed 50 people for my son’s 1st birthday at the zoo (jungle animal theme party) and was made with 4 boxes of cake mix and 4 cans of ready made buttercream frosting and a small amount of 1 can of pure white frosting for eyes.

I used 3 separate 9″ x 13″ cake pans and 1 large muffin pan. I took 3 pieces of sketch paper and cut them into 9″ x 13″ templates matching the cake pans and from there I used one to sketch the head, one for the body and one for the tail. I cut them out and placed them together to see if I liked the alligator and then I drew the way I would decorate it with candies and where I would put the eyes. I cut it out and saved it for when the 3 cakes were baked.

I then took my 3 templates and when the cakes cooled but were still in the pans, I placed one template on each cake and drew around the template with a tube of green gel to get my outline, then I cut out the shapes and placed them all together in the shape of the alligator, saving my cake “scraps” in case of emergency until I was completely done making the cake. I used the 4th box of cake mix to bake 6 large and 12 small cupcakes and used 2 large ones that I cut in half vertically and placed center down next to the alligator’s body for legs. I used one small cupcake cut in half for the eyebrow bones.

The rest of the cupcakes were used as a separate frosted dessert at the party (I frosted monkeys and alligator cupcakes.). For the alligator cake, I used 4 green Wilton food coloring paste jars for the frosting (mostly one shade of green with a little saved for a lighter green which used on nostrils and back body down to tail). I star tipped the entire cake using a THREE STAR tip which saved me A LOT of time since it covered 3 times the cake in less time. Jumbo marshmallows were cut up for teeth and white Jellybelly jellybeans were used for the back teeth. I used 4 spearmint gummy leaves sliced up the center for toes, various green Jellybelly jellybeans on the legs and back of the alligator, and chocolate covered peanuts for nostrils and eyes.

Frosting was pure white canned frosting for eyes, star tipped. The cake was a huge hit with kids and adults alike that I got offers to bake birthday cakes for some upcoming birthday parties for kids of the adults that were there! Inspiration came from this website.

Cool Alligator Cake to the Rescue