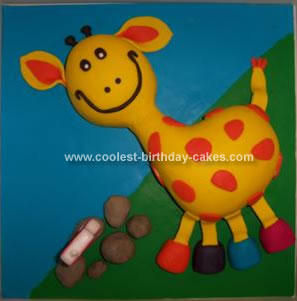 This Giraffe Birthday Cake is one of my son’s first birthday cakes (yes we had two – one for home and one for the party at nanna’s). The idea for this cake came from my son’s favorite toy. It was a giraffe dangling from his play gym.

I found a recipe for a giraffe cake in a book but it lacked the colour and boldness I wanted. Initially I thought I would enlarge the shape of the toy to make a cake pattern but that turned out to be unsuitable because the toy was mainly neck and head and as a cake size it looked out of proportion. After looking on the internet for giraffe shapes I decided to use the template from the giraffe cake in the book. I made it a bit larger than they recommended as we has a few guests to feed, and I also made cupcakes as well.

As it’s been 15 years since I made a cake and decorated it like this (in high school) I tried the recipe for chocolate cake the book gave but found it too crumbly to carve, even once frozen. A heavier recipe was easier to carve. I made the template out of paper and after trimming the cake top flat pinned it in place. One of my husband’s long thin fishing knives was easiest to use to cut straight down through the whole depth of cake.

I used a smaller sharper knife to trim the cake into shape while still frozen. I then cut through the cake and filled it with chocolate buttercream and raspberry jam. I also used the jam to fill the largest gaps on the cake. Working with the almond icing from the packet was tricky because our climate is humid and we don’t have air conditioning. I found it kept sticking to my hands, and the bench, and rolling pin. In the end I went to a local cake supplies shop and bought a soft plastic sheet to roll it out on and used lots of icing sugar. Working fast and in the cool of the day helped. There were a couple of places where the icing stretched and gave out when I covered the cake so I filled these with extra pieces and smoothed them out.

I broke the neck making the cake and ended up placing a skewer through the neck to ‘help’ stabilize it. But it was definitely a weak point. Next time I will make pieces bolder. To make the colored icing I used normal packet sugar icing and colored it with powders and gels. The gels mixed easier into the icing but sometimes made it a bit soft. To mix the powders I found mixing the powder into just a drop of hot water first to dissolve it saved a lot of kneading time. I experimented with the colours making little balls and letting them set a couple of days to find colours I liked the look of.

To cover the cake board I made one colour and covered most of the board with it because I didn’t mix enough icing. I then laid the second colour over the top. I actually placed the yellow icing on the giraffe then placed him onto the cake board because I was scared I would make a muck of the lot if I tried to ice the giraffe in situ.

The feet are all solid pieces of coloured icing (Yuk!) and the legs and tail are flat straps of the body colour. I had to support these with a chux while waiting for them to set hard because they kept sagging. The ears are the same yellow moulded into shape with orange inserts, and just pressed into place like the legs and tail.

I bought a cake marking texta to draw the face details with but found they looked too faint and fine so I moulded those too from coloured icing, and used a little water to help them stick so I didn’t flatten them trying to press them down.

The orange spots were meant to be circles I cut out but when I moved them they distorted so I stuck them down with icing as they came.

The rocks I made speckled by mixing powdered colour only just into the icing. The cupcakes cooked fairly flat which made them easy enough to decorate. I used a scone cutter to cut circles of icing and pressed them in place, and used cookie cutters to cut the animal shapes.

All in all I was very happy with the outcome, though I spent a lot of money making practice cakes, and mixing practice colours of icing. I still have the coloured powders left over to use again and have kept all the recipes and notes so I don’t make the same mistakes again.