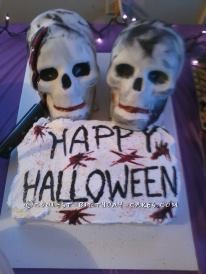 I wanted to try out the 3D skull pan for Wilton’s  and what better time than Halloween?? I baked 2 skulls and after putting them together I covered them both in white fondant. Looking at them just plain white was boring. So I took a paint brush and my black dye and smudged it all over the skull. Then used my finger to smudge it farther. It looked covered in ash.

To tie them together I added a 11×17 cake in the middle. I got the idea to place the cutting knife into the cake like it was being stabbed. You need gruesome on Halloween after all. Then I used my red food coloring on the knife to show a blood effect. I added more red to the cake to tie them together more. The only problem was no one realized it was a cake until we cut it open.