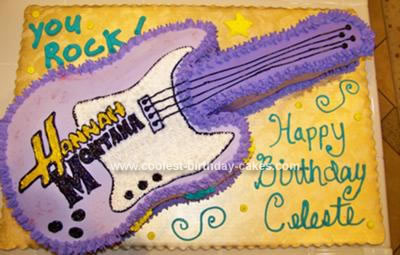 I decided to make it a Hannah Montana themed party for my 5 yr old daughter since she likes HM songs and likes guitars, so I thought how cool it’d be to make her a Hannah Montana Guitar Cake.

My daughter had received a HM guitar last year for Xmas so that guitar was my inspiration to this cake. I baked a deep half sheet cake (for the body) and used a 1/4 sheet pan for the handle. I then cut a mold of her toy guitar on some cardboard and used that as a pattern, so once the cake cooled I put it on top of the cake and started cutting and shaping the cake (cutting slightly bigger around the edges of the pattern to make a bigger cake).

I then cut and filled the cake (with pineapple and whip cream filling) then iced the cake with whipped cream icing. A friend (who used to bake cakes at home long ago) had an KopyKake projector and sold it to me so then I used it to project the HM logo image on it. I traced the image and filled it with piping gel. The inside white part of the cake, I had to do free hand by looking at my daughter’s guitar trying to copy it and then filled it in by piping in white stars with the whip cream frosting using my star tip to give it like a 3D effect.

I didn’t want to leave the sides of the cake too plain so, I pulled out my Xmas star cookie cutter and stamped stars around the cake sides and filled them in with the whip cream frosting using my star tip. The only thing I didn’t get around to doing was adding the knobs at the end of the handle with Junior Mints on toothpicks, but I forgot to buy them, so I had to just add them on the cake with the black pipping gel.

I made this cake in one night, start to finish. It wasn’t that hard to do, the only time consuming part was coloring the icing. Other than that the cake was a BIG HIT. I received a lot of oooos and aaaas from everyone. This was my biggest project ever and the cake was DELICIOUS! Best of all my daughter loved it, she said that it was like her HM guitar! 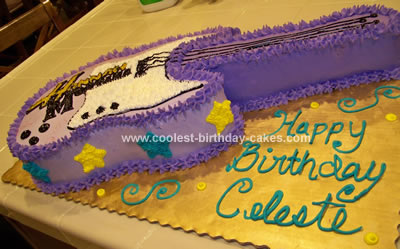