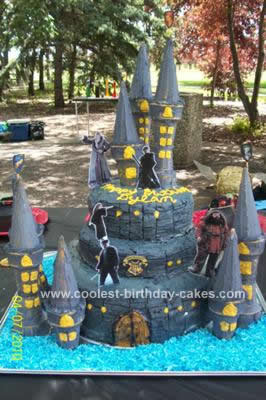 My son decided that for his 10th birthday, he was too big for a theme until I suggested Harry Potter, since he’s been reading the series. We used lots of descriptions from the books, with black, gold, and red (Gryffindor colors) for decorations, goblets, candles, “every flavor Jelly Beans” and gold galleons! There was even a “Potions” table for the kids to mix their own drinks!

But the center piece for the kids table was his favorite, the Hogwarts castle cake. I started out the morning before the party to make this Harry Potter Castle Cake Design with 3 cake mixes, and made 20, 12, and 8 inch round cakes, then froze them so they were easier to work with. I crumb coated them as well. Then I went to work on the towers, which were cones (this took the longest, since it was hard to icing them, and the icing didn’t want to stick to the cones, and I wanted a thick look!).

Later I iced the cake, with grey (that came out a little darker than I wanted) and went around the front of the cake and made marks with a butter knife to make it look like bricks. Since the cake was too big to fit in my fridge, I assembled it at the party the next day (in the “Forbidden Forrest”) using long wood skewers to keep the towers attached, and sprinkling “water” (blue dyed coconut)around the castle, since Hogwarts is surrounded by water.

I had searched for a month before for any Harry Potter toys to put on top, but they don’t seem to make them anymore, and my son wanted life-like, not cartoon-y, so the week before I had printed out character pics, as well as the house sign flags that I stuck on the tops of the towers if you look close. I glued them to card stock, and attached toothpicks.

I had a lot of fun with this theme! 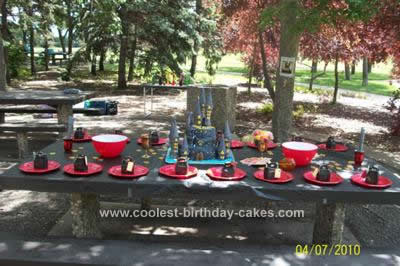