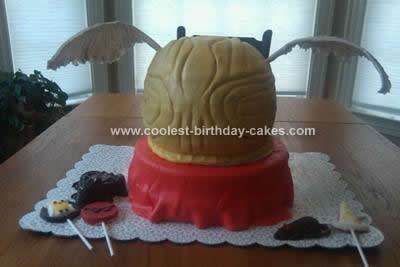 I made this Harry Potter Golden Snitch Cake cake for my daughter’s sixth birthday. We are all crazy about Harry Potter at our house and it seemed like a fun cake to try. I made the cake circular by baking the top and bottom half in a Pyrex bowl. I used the Hershey’s Special Dark cocoa and the recipe on the back of the cocoa package. It makes a delicious, moist chocolaty cake. I baked the cake in three batches, the top half (chocolate) in the Pyrex bowl, then an 8” round (Wilton Pan, also chocolate). For the bottom of the ball, I used the same Pyrex bowl as the top, but I made a vanilla pound cake. I chose the pound cake because it is dense and could support the weight of the top layers without collapsing.

I used Marshmallow Fondant to cover the ball. There are several good recipes for MM Fondant online. It is very easy to make and tastes much better than the ready-made fondant you can buy at the store. It is also very easy to color. I add the color to the marshmallows before I add the powdered sugar in the recipe, so you don’t have to knead the color in after it turns into the doughy fondant. So, I made a golden yellow fondant to cover the cake ball. I used some of the gold dust powder to give it shine and used the standard Fondant and Gum Paste tools to carve in the detail lines on the snitch.

The wings are made from store-bought Gum Paste. Just roll it out to about 1/4” thick, cut the shape and use the fondant tools to thin and feather the edges. I wrapped the ends around a lollipop stick to give the wings support and placed them in a bowl to set and harden with a curve. Be careful with the Gum Paste, though. It is brittle and delicate when it dries. After the wings were dried, I “painted” them with silver dust to give them some shimmer.

I made some extra red MM Fondant to cover an upside-down cake pan and used it as a stand to display the snitch. It was a huge hit with everyone at the party.