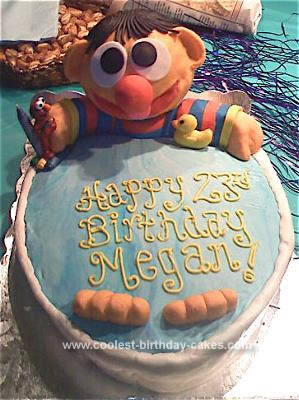 This is my homemade Ernie birthday cake.

To make the bathtub, I used two cake mixes in an oval cake pan. Two 6″ round half sphere mold cake pans were used for the head; these two cakes were then joined together with buttercream frosting.

The arms were the biggest challenge. I used two small 2″ x 4″ tinfoil loaf pans, then bent and crushed the bottom and sides to form the arms and hands. A small 5″ bundt pan was used for the neck.

I covered the cake with buttercream frosting prior to adding fondant. Starting with the oval tub, I rolled the marshmallow fondant into a ball, slighty larger than a softball. I then dipped a toothpick into blue coloring and inserted a swirl of color into the ball, in several places. I worked in the color, but not completely. I then rolled out the fondant, leaving blue white swirls which gave the impression of water, and put it on the cake.

The side of the tub was covered in white fondant, cut into long 4″ strips and wrapped around the edges, leaving 1″ above the cake. This 1″ was then rolled down onto the water, creating the top edge of the tub. I trimmed off the excess fondant at the bottom.

The head, the two half spheres of which had already been attached with buttercream at the start to allow for hardening, was covered in orange fondant. The fondant nose was glued to the face with buttercream and four toothpicks. Ears were sculpted from fondant and smoothed onto the head. The eyes were white and black fondant. For the mouth, I carved a half moon into the cake and lay the red fondant inside, with a pink tongue attached.

I set the head aside, to be attached just prior to the event. I placed the arms on the cake, after covering the hands with orange fondant. I rolled out red and blue fondant, cut it into 5″ strips and placed the colored strips, alternately, on the arms for sleeves. Yellow strips were added at the edge of the sleeves and neck.

The hair was formed by rolling strings of black fondant. Finally, to attach the head, I inserted a dowel and several toothpicks into the neck and slid the head onto it.