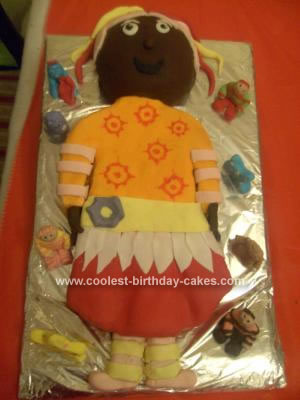 This Upsy Daisy Birthday Cake I made was for a friend’s 2 year old little girl who loves In the Night Garden and her favorite character is Upsy Daisy.

First of all I printed a picture of Upsy Daisy from the internet, then cut around it. I then baked one slab cake 12″ x 8″ in chocolate and one chocolate cake in an ovenproof bowl but only filling it a quarter full as this was for the head.

When they were baked and cooled I put them in the freezer for about an hour so they would be easier to cut. I then placed the picture on top of the slab cake and cut round it. I then placed the cake on board and placed the bowl cake about and joined them both together with a thin layer of chocolate butter icing.

I then got my fondant icing and kept a little white back for the eyes and apron. I then started kneading different paste colors into my fondant starting first with a dark brown for the hands and face, then red for the skirt, pink for the hairline, eyebrows, legs shoes and stripes for the arms.

I then colored some orange for the jumper and yellow for belt and stripes on legs and a very small amount of lilac just to make a flower for to go on the belt. I then rolled out the brown for the face and placed over the whole blow cake trimming around edge.

Then rolled out the orange for the top and again put that in place and trimmed around with knife. Then cut slithers of cake from skirt to make it look like pleats then I placed the red fondant over it making sure that I gently eased it into the pleated area without tearing the fondant. Then I rolled out some fondant in small strips to goon legs and arms in the colours on the picture and yellow strip for belt and shaping a lilac flower shape to place on the belt.

Then rolling pink fondant cutting it to shape of hairline before placing I on head, then with scraps of different colored fondant I rolled it in my hands just to make sausage shapes for the hair and attached these with a littler water.

Then I added the facial features which were pale pink eyebrows, white fondant for the eyes, small piece of black place on top of white for the pupils and then a tiny white piece of fondant on top of that, small ball of brown for the nose and then with a piece of place shaped a mouth.

Then using a food coloring pen in read I drew some lower shapes on orange top, then lastly with more of the scrap fondant molded by hand, some more of the characters from In the Night Garden such a Iggle Piggle, Makka Pakka and Tomliboos to place around the edge of the cake board.

In the Night Garden Cake