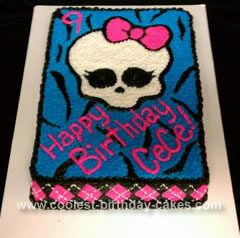 This homemade Monster High cake was made for my friend’s daughter’s 9th birthday. She is very allergic to eggs, so they gave me a mix that made a very yummy egg-free cake.

I had to use four boxes (2 per 9″x13″ layer), though, because the cake comes out very thin. After putting the layers together, I put on the crumb coat and let it dry a little. I found a picture of the skull online and copied it to a word document.

I then blew it up to about 7″x8″ and printed it out. I cut out the image and traced it onto the top of the cake with one of my cake tools. Everything was decorated with piped butter cream. The skull was outlined in black with tip #10, and the rest of the skull and the zebra print were starred in with tip #17. The argyle sides were filled in with tip #7, and the white dashes were piped with #3. The shell border was done with #18.