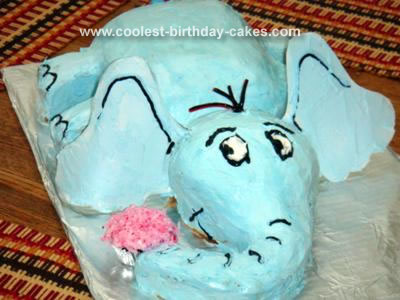 My cousin’s daughter just turned one and they were throwing a Horton Hears a Who party. My cousin approached my and asked me if I could make a Horton Hears a Who cake (elephant cake) for the party. I love to bake and usually make the cakes for friends and family’s parties. My cousin had seen a few ideas on this website and sent them to me. I absolutely loved this cake and it was a hit at the birthday party!!

Stack the cakes once cooled. While cake is sitting horizontal, cut off 1/3 of the end of the entire cake. From the piece that was cut away, cut four sections from the top cake to be used for Horton’s feet. Save the rest to be used to make Horton’s trunk. I carved the rest of the cake freehand to resemble Horton’s body.

Bake a cake in half of a Sports Ball Pan; this will be Horton’s head. Turn cake dome side up and place up against the body portion of the cake. I cut the shape of Horton’s ears out of poster board, iced them the same blue color used for his body and attached them to Horton’s head using dowel rods.

Take the pieces of cake that were cut from the body section and form into a “u” shape off the front of Horton’s head.

For the tail, I made marshmallow fondant and died it the blue color and then used black icing to color the end of the tail. For the hair, I used black shoe string licorice and stuck it into the top of his head.

I used a blue food coloring and mixed it with white icing until I achieved the light blue color of Horton. I iced everything with this color. You will need to add extra icing to sculpt where the head and trunk meet.

I used black icing gel to draw Horton’s eyes, the marks on his trunk, mouth and ears.

I baked a mini cupcake and used pink food coloring to dye the coconut for the top.

10 thoughts on “Coolest Horton Hears a Who Cake”