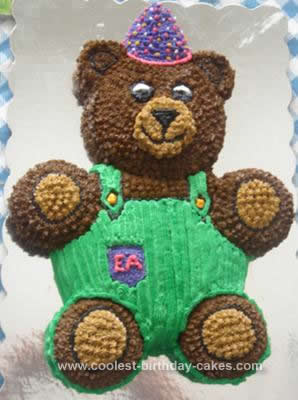 Our 2-year-old daughter’s favorite character is Corduroy the teddy bear. She loves Corduroy. She even calls Teddy Grahams “Corduroys”. Not surprisingly, when given the option between Corduroy and a kitty cake, she chose Corduroy.

I have never decorated a cake. This would be my first and it would be for my daughter’s second birthday. I was a little intimidated at the thought of creating a specialty cake, and more than once I wondered if I should have called a bakery! However, I really want to make cakes for my children’s special events and I thought this Homemade Corduroy Bear Birthday Cake would make her birthday even more special.

I first considered purchasing a Wilton teddy bear cake pan, but I expected that I would not use it enough to justify the purchase and it would be shoved to the back of our cabinets taking up space once the Corduroy cake was made. So I decided to create a cake on my own using standard pans that many people have around the kitchen.

I heard a few horror stories about using cake mixes and not having enough batter when making a specialty cake. To avoid having a Corduroy bear that was hollow or missing a part, I decided to make my own from-scratch cake and icing. The cake recipe I used was from Sunset’s Easy Basics cookbook. It’s a butter cake recipe, very easy, but just as good as a bakery cake.

I made 2 batches of cake batter using the recipe. I made an 8-inch round cake and a 6-inch round cake with the first batch. With the second batch, I made 6 jumbo cupcakes and 12 regular-sized cupcakes. I used Wilton pans and I made sure that they were greased and floured very well. For the regular-sized cupcakes, I used paper liners. Once the cakes were done, I cooled them completely on wire racks and then sealed them in containers and refrigerated them overnight.

Once the cake was assembled, I mixed buttercream icing. This is an old Wilton recipe that my mother used for years. It’s easy to make, ingredients of butter, powdered sugar, vanilla, milk, and easy to work with while icing. I mixed my own colors using Wilton coloring.

I used my late mother’s Wilton tips she bought about 40 years ago. It’s true that these tips last a long time! With a #4 round tip, I outlined Corduroy’s eyes, nose, mouth, paw pads, overalls, and buttons on overalls with black icing. I then filled in the dark parts of his eyes and his nose with black icing. I also made sure to secure Corduroy’s appendages (ears, hat pieces, nose, paws) to the round cakes using icing (I did not use toothpicks due to choking hazard).

The Homemade Corduroy Bear Birthday Cake was a joy to make. Icing it took about 4 hours, but this could be due to having frequent interruptions from a rambunctious toddler and an inquisitive infant. Also, I took a lot of breaks to decide on color shades and to mix more icing. Although it was time consuming, I’m hooked! I plan to make my younger daughter’s first birthday cake next month. 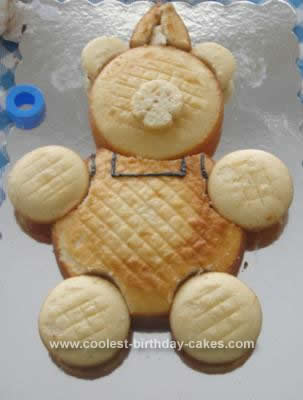