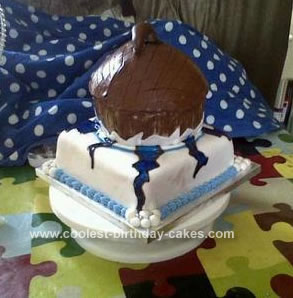 My son is a massive Ice Age fan and had asked for an Ice Age Scrat Cake for his 7th birthday. I thought about an iceberg but finally settled on Scratt’s acorn in the ice after seeing Ice Age 4.

I used a 9″ x 9″ marble cake for the bottom and covered it with white fondant and then painted it with white luster dust to make it sparkle. For the nut I used my giant cupcake form which I covered with chocolate fondant and painted with gold and a couple of different brown luster dusts (first time I had used luster dust and found it really easy to use even if I still have a sparkly turn table after 3 washes).

For the cap of the acorn I used a serrated knife to score texture of the cap as I didn’t have one of the little roller tool and it worked out OK. I made the stalk for the acorn out of the chocolate fondant too and used wadded up cling film to keep it from falling over too much.

I used an ice blue icing to neaten the bottom edge of the cake and then using black icing piped on the cracks in the ice and filled them with blue piping gel. If I ever had to do it again I would find some other way because as it was such a hot day for his birthday party by the time it came to blowing out the candles the cracks had run and looked quite messy. Not that being messy made any difference everybody loved it.