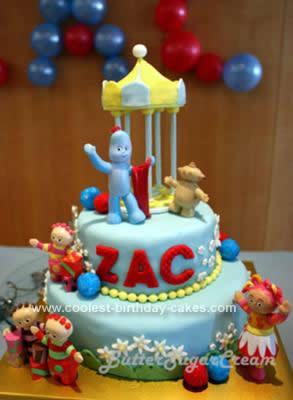 My son is a fan of In the Night Garden, the British TV programme aimed at toddlers and pre-schoolers. His sister watches it occasionally but it was when she got the Makka Pakka plush toy that sings and talks that he really started taking an interest. So it was a bit of a no-brainer when it came the time for me to think about a Homemade In the Night Garden Birthday Cake Idea to make for him for his 1st birthday a week ago.

I saw some cakes online where they created the characters out of gum paste. They look like the real thing but I was going for an “OMIGOD! That’s Igglepiggle.” Perhaps I was in doubt of my abilities to get Upsy Daisy’s face colour right or contemplating how I would get Iggle Piggle’s blanket to fall just so. It could also be the stark reality that I would have no time to complete the characters as they would need at least 24-48 hours to properly dry out and I only had 4 days to make and bake (at the same time complete 2 orders the day before the party) and prepare for the party. So I thought, “Nah!”.

That’s why when I was in Sydney in October, I bought the figurines from Toys R Us. Easy. So now it was left to me to create the scenery. I had to make the gazebo first. I thought about how to make the top of the gazebo as it would be challenging. I considered using fondant and make it into gumpaste but it seemed like a waste of good fondant. No one was going to eat it and I wanted it as a keepsake (we’ll see how long that will last after a couple of home moves) too. I got the idea to use Rice Krispies made into treats from watching Cake Boss. Buddy goes on about how he uses rice krispies/cereal to mould the larger and more complicated figures.

The base of the magic gazebo was just made from gum paste as it was quite thin. I was really happy with the results as the dimensions were about right for the cake and Iggle Piggle who shared the top tier of the cake with Makka Pakka.

I also added some daisies and blossoms which are in the show as well as the little balls of flowers that dot around the landscape in the garden. These were gum paste balls covered with Tylo (edible glue made from water + CMC powder) then rolled in coloured sugar.

The cake had serious chocolate flavour. I first tasted it a year ago from my friend W who made a delicious birthday cake for her daughter. She gave me the recipe which she got from Allrecipes.com. I made it for my Dad in May and after the first mouthful he said, “This is too much chocolate!” and guess what the name of the cake is: Too Much Chocolate Cake! Hee hee hee. Oh but it’s soooo good though. Think of a Devil’s Food cake plus chocolate pudding (Jell-O) and chocolate chips. Deep, dark and intense. The kids were on a sugar rush for hours after!

Here’s the recipe. I added Chocolate Cream Cheese frosting between the layers to add that little bit of tartness to cut through the heaviness of the chocolate. A match made in heaven. 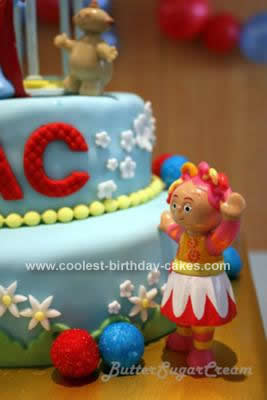 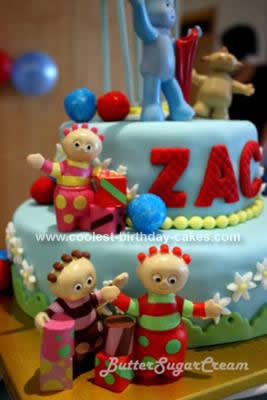 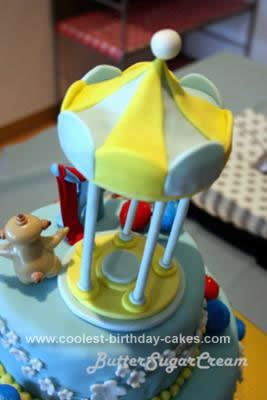 Coolest In the Night Garden Cake

1 thought on “Coolest In the Night Garden Birthday Cake Idea”