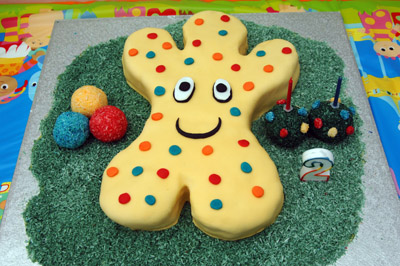 I decided when my daughter was born that I would do what my mum always did for me and make a full blow out decorated Birthday cake every year. First year I made a duck pond and sculpted ducks frogs and plants out of fondant for the top. For her 2nd Birthday I got a little more ambitious.

My wife warned me I was destined for disaster, but I’m a man so I never listen. I was working a 7 day run of 12 hour midday to midnight shifts, so this Haahoos from In the Night Garden Cake had its finishing touches between 1 and 4am the night before the party. By trade I’m a Police Officer and no great artist, so this may inspire some others.

The idea came from her love of the show and the relative simplicity of a Haahoo. I started with 2 round 10 inch Victoria sponge cakes, 2 layer sandwiched with raspberry jam and buttercream. I then cut one cake to resemble the top half of the Haahoo and the second for the bottom, then some offcuts to fill in the middle.

I covered the whole lot with regal Ice which I coloured using the pots of paste like colouring that resemble oil paints. I used these colourings for all the items on the cake. I rolled out the icing in one sheet and used cling film to lift it on the rolling pin and prevent sticking.

I then used my fingers dusted with cornflour,to eliminate any moisture and drag marks, to smooth the icing and correct any imperfections. I then made up small batches of other colours for the spots and eyes, was originally going to use smarties, but after opening 3 packets decided the cost of buying enough to get the right colours was obscene.

The grass is dessicated coconut which was placed in a sandwich bag and shaken about with a small amount of the colouring, it was then stuck to the board using a boiling water and apricot jam sticky wash.

To make the bushes I just made up coloured balls and then made them slightly wet with cold water and dropped them in a bag of coloured dessicated coconut to get the texture, the green bushes with blossom is the same thing with tiny balls of fondant stuck into the bush with a small piece of cocktail stick.

I have to say I was really chuffed and my little girl still talks about her Haahoo cake whenever she sees the number 2 or the Haahoos in the night garden. So all the effort was worthwhile, even if cutting it was a bit painful.

Coolest In the Night Garden Cake

5 thoughts on “Coolest Haahoos from In the Night Garden Cake”