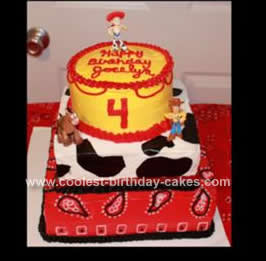 I made this Homemade Jessie and Woody Cake for my daughter’s 4th Cowgirl roundup birthday party. She loved it and everyone was very impressed with the cake. I was even impressed with my first cake “stacking” attempt.

Then I frosted the top tier with yellow buttercream frosting. Then I placed 4 more support columns into the middle tier and placed the top tier on top.

Then I piped the design of white squares and paisleys onto the bottom layer. Next, I cut out the “cow spot” shapes from a Wilton black sugar sheet, wetted the back of the cut-outs with a wet brush and placed them onto the middle tier. The top tier I piped red frosting to make the “swag” design and used a “star tip” to to the top border.

I used a “basket” tip to do the red rope trim on the border of each of the layers. I also added 4 strips of Twizzler red rope licorice on top of the black frosting on the middle tier.

A Jessie novelty toy was placed on top of the cake and Bullseye the horse and Woody were placed on either side of the middle tier.