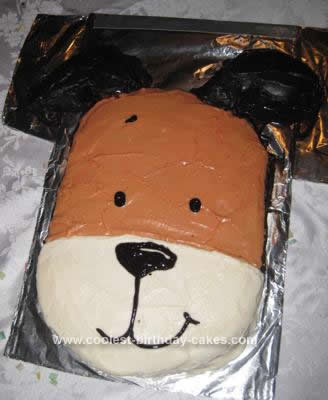 My 2 year old loves Kipper, so for his 3rd birthday, he said he wanted a Kipper the Dog Cake.

I made the cake homemade from my Betty Crocker cookbook, as well as the icing. I went online and Google searched images for Kipper the Dog. I found a very simple head shot. Using an oversized cake pan (12×14 I think)I made the cake and after it cooled, I stuck it in the freezer (this makes the cake easier to cut and ice). I later cut the shape out by looking at the picture. The ears (which are hard to see in the photo) were cut out of extra pieces and then attached with icing.

I then made homemade icing and tinted half of it with yellow and red food coloring until I had a color that was pretty close to Kippers face. With the rest of the icing I did the bottom half of his face white. I then used liner icing to draw on the mouth, nose and eyes. For the ears, my fudge icing came out too runny, so I had to go buy some chocolate icing just to do the ears.

The cake was good, especially the homemade icing!