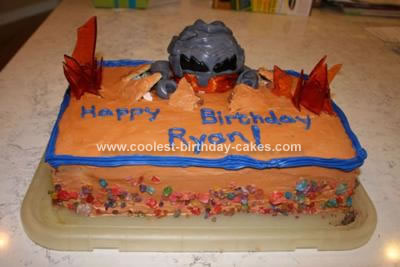 For my son’s 7th birthday he asked for a homemade Lego Power Miners birthday cake. I selected the Power Miner Rock Monster as the main feature of the cake.

For the base of the cake I made two 9×13 chocolate cakes with a strawberry jam filling. I used the bottom half of a cupcake (muffin top removed) and one cake from the Wilton Mini Ball Pan for the body of the rock monster. Buttercream frosting held the two pieces together and I then frosted the top half gray and the bottom half orange.

Gray marshmallow fondant created the features of the rock monster. It was my first attempt at using fondant and after reading many reviews I decided to use marshmallow fondant. The fondant took a while to make and I think I probably should have added even more confectionery sugar, but it was workable and completely edible. Since I was only going to use the fondant for the rock monster I added the food coloring while making the fondant to ensure a consistent color.

I made hard crack candy with orange food coloring to create the crystals for the bottom half of the monster and the two sets of rock crystals. The hard crack was easy to make and once it reached the appropriate temperature I poured it onto a greased half sheet and allowed it to cool. After it cooled I lifted it off the sheet and broke it into pieces.

I would recommend making the hard crack candy only a day in advance as it has a tendency to absorb moisture from the environment and mine began to drip (I had made it 3 days ahead in an attempt to reduce the things I needed to do the night before the party and we had several rainy days). You could also use rock candy for the crystals, unfortunately my son had asked for an orange rock monster and the candy store didn’t have rock candy in orange.

I broke some of the hard crack candy into small pieces for the bottom half of the rock monster. I used a recipe for buttercream frosting that contained half butter and half shortening. I added food gels to get the appropriate colors for the brown ground and blue for the text and blue edge.

Broken graham crackers topped with buttercream frosting and propped up by chocolate rock candy (from the candy store) provided the effect of the ground opening up and the remaining orange hard crack candy created the two clumps of orange crystals. The sides of the homemade Lego Power Miners birthday cake were decorated with small pieces of rock candy also purchased at the candy store.