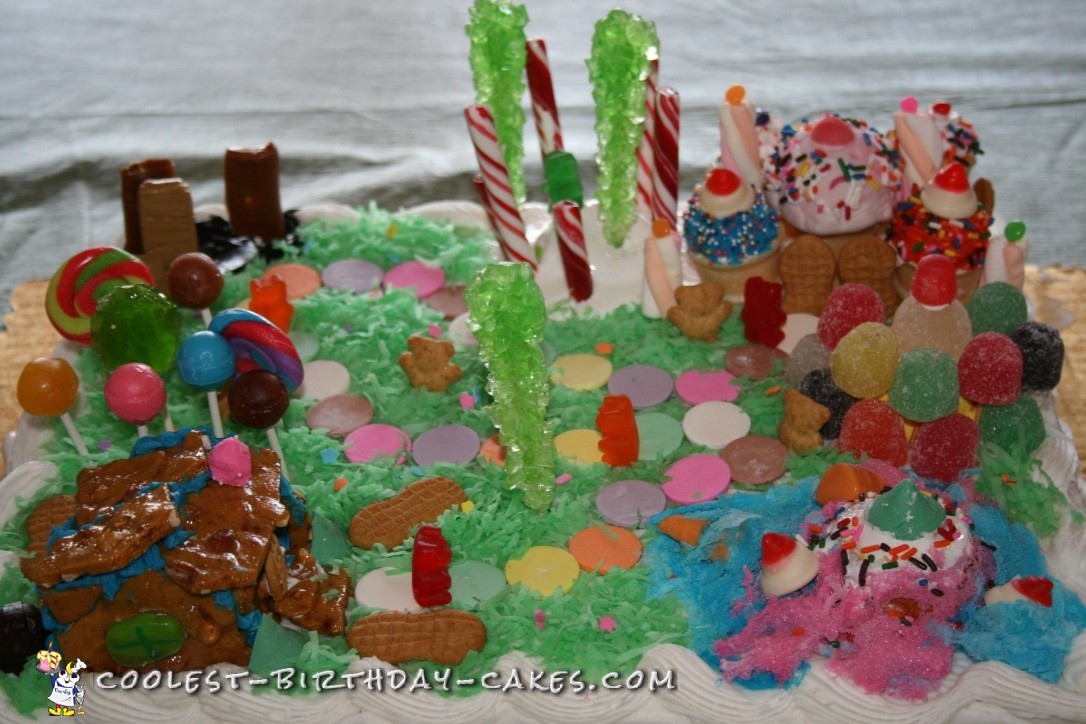 I was pretty excited to try more coolest-homemade-cakes ideas (that I had wanted to use the first time around, but couldn’t) to improve on the first one. Again, I used a premade cake that was iced white, and made the grass landscape out of coconut tinted green, but this time, the path was made of Nekko wafers (found those at Cracker Barrel.)

Like last time, I built the structures next. I really wanted to make Gramma Nutt’s house out of peanut brittle, but couldn’t figure out how to break it cleanly. So Gramma Nutt had to settle for a ramshackle hut, glued together with blue icing because that was all I had. (At least she got a peanut brittle porch this time!)

Again, Starbursts flattened out to make decent windows, and I used a toothpick to impress a cross on them to indicate panes. Nutter Butters made delicious doors and walkways. And the green candy melt halves sitting at the front corners of the hut were pressed into service to hide a couple of gaps in the walls.

The candy ice cream cones that made up King Candy’s Castle this time were different from the ones I used on the previous cake, and their larger size meant that the Nutter Butter walls needed to stand up vertically so that they wouldn’t be dwarfed by the towers. However, I ended up beheading two of the cones and I manhandled two jumbo-sized spice drops until they fit the empty cones, then decorated them to match the intact ice creams. (The intact cones are in the front, the impostors in the back.)

A couple of the gummy ice creams that were destined for the Ice Cream Sea had separated from their cones, so I used their top halves to adorn the two towers in front. The two towers in the back were crowned with a couple of colorful candies.

I honestly don’t remember the large ice cream in the middle of the castle at all, but my daughter says it was made of the same marshmallow candy as the other four, they were just packaged separately. Marshmallow poles filled in the gaps.

Using cotton candy to make the Ice Cream Sea the first time around taught me two things: I make dumb mistakes when I’m in a hurry, and although melted cotton candy looks a lot like melted ice cream, it has no fluff whatsoever. I still wanted to partly embed the gummy ice cream cones in the sea, so most of it was made of blue frosting, with a little cotton candy draped over them.

Anyway, the island in the middle of the sea was a Sno Ball Snack Cake, iced and decorated. It still seemed to be missing something, so I topped it with a green candy melt.
Like last time, the Peppermint Forest is made from peppermint sticks stuck into a marshmallow cream landscape, but this time, I used one of the ice cream cone tops (I had cut off before) to make a small hill, and added a few green rock candies to represent evergreens.

The other candy ice cream top was draped with marshmallow cream and heaped with spice drops to make the Gumdrop Mountains.

If memory serves, the Molasses Swamp was made of fudge sauce (like for topping ice cream). I used firm Slo Pokes, which I found at Cracker Barrel. Success! They stood their ground until they were taken out and eaten.

Originally, the only thing in the Lollipop Forest was a bunch of Dum-Dums, so we added variety with a green sucker that the kids donated, and two adorable swirly lollipops that I found in a little candy specialty shop at the mall.
Lastly, I peopled the cake with gummy bears and Teddy Grahams, and scattered flower sprinkles throughout the grass.

Like its predecessor, this cake was a lot of fun, both to make and to serve, and once again, all the guests requested certain parts: “I want a piece with Gramma Nutt’s house!” “I want a piece with the Ice Cream Sea!” etc. Some of them just wanted the candy. Definitely a hit. 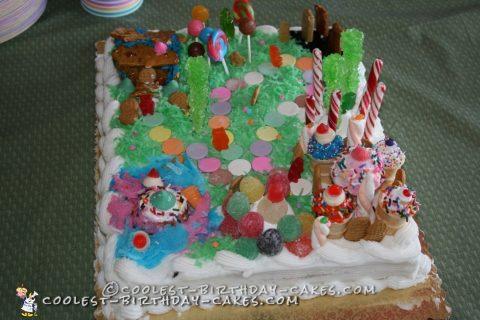 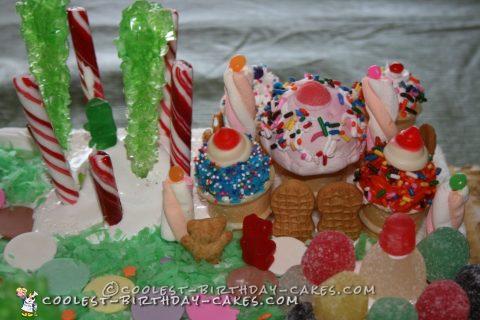 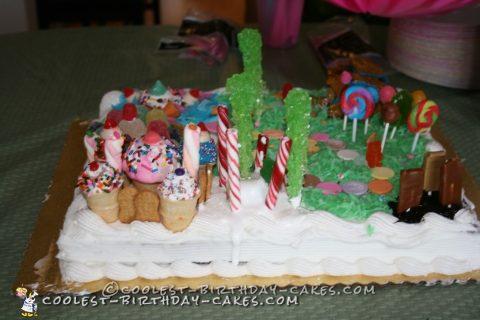 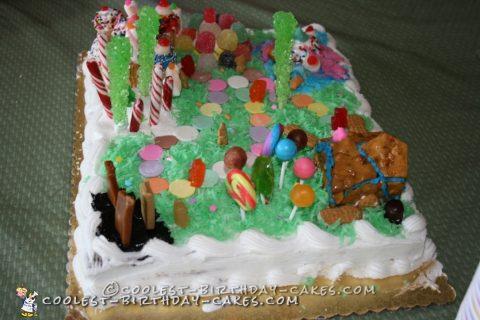