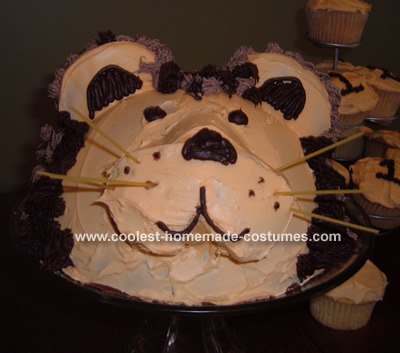 I made this lion cake for my 2nd son’s 1st birthday. It was inspired by the Martha Stewart “monkey cake” that was featured on her television show a few years ago (I made that cake for my 1st son’s 1st).

The head of the lion is baked in a metal mixing bowl (I used the bowl from my Kitchen Aid stand mixer). I used 2 boxed cake mixes prepared according to the directions. I filled the mixing bowl to 2” from the top and used the remaining batter for cupcakes (4 are used on the lion).

Bake according to the directions. Bake the head for an additional ½ hour more than directed and then check every 10 minutes thereafter with a bamboo skewer until done. Invert cake to remove and allow to cool.

Make a fresh cut to the bottom of the “head” to allow the cake to sit straight. Place onto a cake stand with the edges lined with parchment paper (this allows you to remove the strips of paper after you have frosted the cake and end up with a clean plate).

Frost cake. I used vanilla frosting tinted with yellow food coloring. Square one edge of a cupcake to make an ear. Frost and secure to head using toothpicks. Do the same for the 2nd ear. The snout is made of 2 more cupcakes. Placing the cupcakes side by side, square off the top and inside edge the cupcakes (so that you have a right and left side). Secure with toothpicks to the front, lower aspect of the face.

The bridge of the nose is made with a remnant piece from one of the cupcakes. Place the piece like a tent over the two cupcakes and secure with toothpicks. You can support the “tent” with a blob of frosting if needed. Frost the bridge of the nose very carefully as it tends to be fragile.

The facial features of the lion are made with piped chocolate frosting. The eyes are dots, the nose is a filled in triangle, the inner ears are filled in semi-circles, and the mouth is an anchor shape. Finally, the whiskers are uncooked spaghetti noodles inserted in the snout.

The cake was a hit and is really quite easy to make. You could use this same template to create almost any animal (i.e. cat, dog, pig). Have fun and be creative!