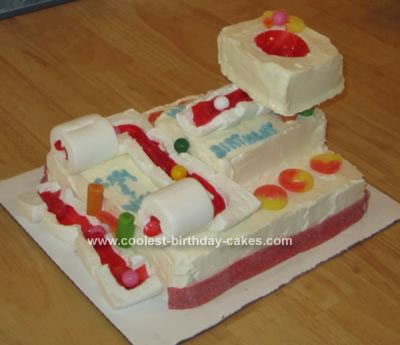 My son loves marble runs so we decided to try to make a Marble Run Cake for his birthday. He actually designed much of the marble run part, even said “Mom, it would be so cool if we could make a funnel go though the cake!”

So we got gumballs for the marbles, and tried various things for the ramps and tunnels but what we ended up with was giant marshmallows cut in half and hollowed out, then lined with fruit roll-ups. It was sticky & difficult to work with, but a wet knife and dry hands helped. Next time I’d try something like large laffy taffy that can hold its shape once molded into a U-shaped ramp. Or fondant of course, but we don’t love that taste. So we designed how the ramps & tunnels would fit on the cake and I made all the ramps & tunnels a day ahead.

To make the marshmallow tunnels, I just stuck 2 ramps together making a hollow O shape.

I baked a 9X13″ cake, cut about a 3″ strip off one end, and then cut another 3″ square off the end of that strip. I froze the 3″ square to make it easier to work with. Frosted the large cake & then added the medium tier on one end and frosted.

After the small square was frozen I used a paring knife to cut a funnel shaped hole through the center and then frosted it and lined the funnel part with fruit rollups. I used fruit tootsie rolls as columns to support the top tier, elevated over the middle tier so the “marble” can drop through. They weren’t terribly stable so next time a thicker support would be in order.

Then I lined up the marshmallow ramps & tunnels so the marble could theoretically follow a path down to the bottom. Note, it didn’t actually work as a marble run (too sticky). I had to stress that fact to my son. We had some extra sour fruit O’s and sour fruit strips from our ramp & tunnel experiments so we decorated the top & bottom of the cake with those.

So it wasn’t very professional looking, but was the only one of its type I’d ever seen, so a pretty good first iteration. I look forward to seeing what others come up with!