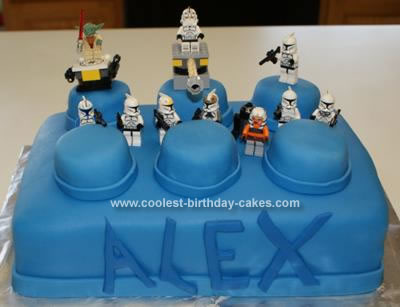 I wanted to make a Lego cake for our son’s 10th Birthday. We experimented with a single sheet cake with cupcakes on top and then just plain old icing. It was OK but thought we could do better.

We have always wanted to work with fondant but we always thought it was difficult to work with. Now we have watched enough episodes of “Ace of Cakes” on the Food Network to think we could do something simple with fondant and not try to get too crazy.

The Star Wars Lego Cake is 2 sheet cakes that were shaved so they are almost flat with butter creme icing in the middle. The outside was also frosted in butter creme. The 6 pieces on the top are cupcakes with the “muffin tops” removed, butter creme frosted.

Cakes were from a box. Butter Creme was from a recipe we found on the web. We bought boxed fondant at Michael’s. I also bought Royal Blue coloring from Michael’s. Coloring the fondant was “difficult”, took a lot of time and I wanted it darker but needed to get the cake finished, plus my hands were “tired”. I did add more color to some leftover fondant which I used for the letters, add those were darker but I wanted it really really dark blue.

I used powered sugar as a dusting to keep the fondant from sticking to the rolling pin and counter, I had read corn starch could be used but powered sugar seemed like it would work just fine and might add some more sweetness to the fondant. Rolled out somewhere between 1/8″ and 1/4″ of fondant. I used a traditional rolling pin with the handles but those longer thinner sticks that I see them use on TV would definitely be better. My first attempt stuck to the counter so I had to redo with way more powdered sugar. The second time it came up perfectly and went on the cake very easily. I worked it around the cake and cut off the excess. It was a lot easier than I though it was going to be. The cupcakes were a much tougher challenge and if I ever made the cake again I think I would use rice krispie treats for those instead of cupcakes.

The last touch was the letters. I darkened some fondant a few shades bluer and tried to cut out Happy Birthday Alex but that just wasn’t working. If I had a few hours I probably could have done it,it may have been easier if I rolled out the fondant and let it harden a little before I cut out the letters. But anyway, just did Alex and it was kinda cool, sloppy but cool.

Notes… I used a damp cloth to get the powered sugar off the fondant cake but the water makes the fondant extremely sticky. I tried to use a clean new paint brush at first but the whole cake had that powdered sugar dusted look, the wet cloth worked well.

Overall I give it a difficulty level of 7 or 8 out of 10. We are extremely happy with the results for our first time with fondant. With the right tools and some more trial and error, I could see how we could get better with it. The intimidation factor is gone and I think we will use it more often in the future.