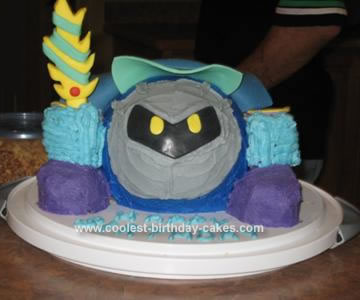 My nephew wanted a Kirby character cake so I researched and found it was a video game character who has lots of disguises. This Meta Knight character is one of the antagonists

I used a wilton sports ball round cake pan for the body (be sure to cut the bottom off so it doesn’t roll around), and a 6 inch regular cake pan for the feet. The feet need to be cut out. The arms were made with a miniature loaf pan – also need to cut. The feet were just set next to the ball and the arms were attached with lollipop sticks in a couple places. Use frosting as “glue”.

Two boxes of regular yellow cake mix is enough and there will be enough leftover to make 12 cupcakes. Two batches of wilton buttercream frosting recipe were used. I just tinted the colors in separate bowls as needed with wilton gels.

Fondant was used for the black eye slot, eyes, sleeves, cape and sword. Most of the cake is frosted.

Be sure to refrigerate the entire cake when complete so it sets up. If I were to make this cake again, I’d use gum paste for the cape, sword and sleeves as the fondant was heavy. The cape ended up being shorter than planned as it broke due to the weight.

My nephew and his friends said it was the coolest birthday cake ever.