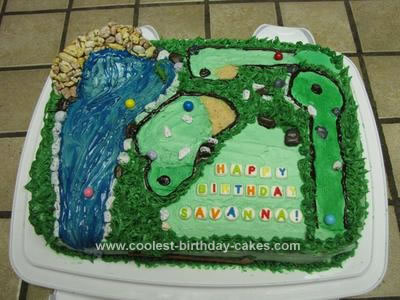 My daughter wanted her party at the local miniature golf place with a cake to match. I used a satellite image of the course plus some of my prior photos to design 3 of the putting greens and the waterfall. I drew it all out on sketch paper the exact size the cake would be so there would be no mistakes when I got ready to draw it out on the actual cake.

The cake was two French Vanilla boxed cake mixes each baked to 9 x 13 and stacked. I used canned Blue Vanilla frosting for the filling between the layers. I then whipped up homemade butter cream frosting, tinted it green and iced the outside of the cake. I saved a little bit and tinted it blue to use for the waterfall. I then used glittery blue piping gel over the blue butter cream and drug it through the butter cream to create a flowing effect and even let the water fall off of the side of the cake.

I used bought candy letters and left a bare spot in the middle of the cake for squiggly candles that were placed at the time of the party. There was also a blue sparkly # 9 candle that was placed in the water.

The miniature golf birthday cake was a big hit with everyone and tasted wonderful! 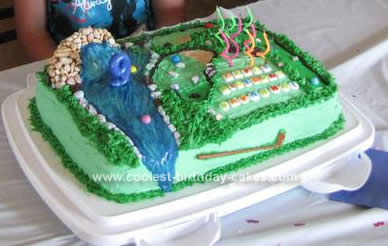