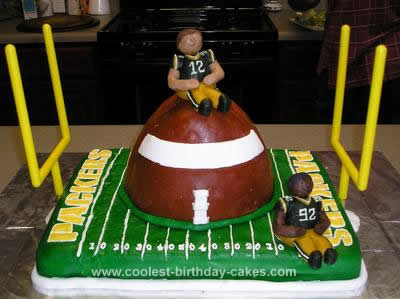 My sister-in-law asked me to make my brother’s 30th birthday cake. So, being that my brother is a HUGE Greenbay Packer fan, I decided to make a football field cake with a football coming out of the middle of the field and his 4 favorite Packer players made from candy clay and icing.

The first thing I did was made his Packer players out of the brownie pop mold from Wilton. They were formed with fondant jerseys, candy clay legs, arms and heads and then used royal icing to pipe all the details. I made these 2 days before we went to Georgia for his birthday. I also made the numbers and lines for the football field ahead of time with Color Flow icing that turns hard like candy when it dries.

When I got to Georgia, I made the field out of a rectangular cake pan and the football from the Wilton football pan. For the football, I cut it in half and pasted the two sides together for a half 3D football. I used fondant to cover the football and the laces and green fondant for the field. After assembling the football I pushed a dowel through the football and into the field cake. I then placed the players on the cake.

When the guests arrived, they were so impressed with this Packer Football birthday cake because they didn’t realize that it was a cake. They thought it was just a decoration. Everyone loved it! P.S. I make my own fondant out of marshmallows because the store bought is too expensive and tastes like chemicals. People actually eat my homemade fondant! 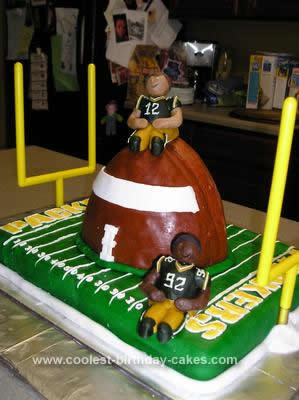 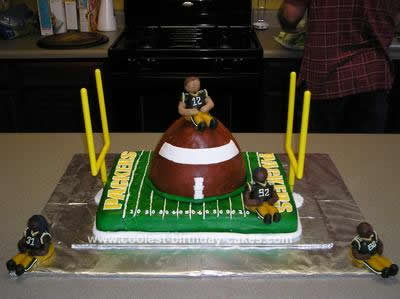