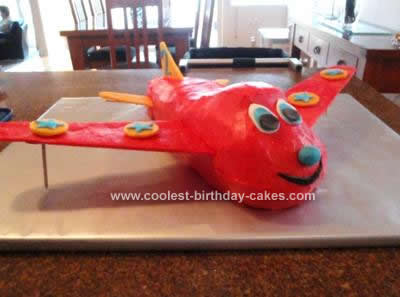 I made this Homemade Plane Birthday Cake for my son’s 2nd birthday and I can tell you he was very excited when he saw it! Luckily he didn’t realize it was a cake or else I don’t think it would of lasted all day till his party. I think I ended up baking 5 loaf cakes to make, but this is only because they didn’t turn out so well and I cut heaps away.

But basically how I made it was:

I cut all the cakes into rectangles and stuck them all together using buttercream icing. I used chocolate buttercream which was so tasty! It used two long and three high at the front. Then I got a sharp knife and started shaping it. I really just did this by looking at it, cutting looking, cutting looking. I also Googled other pictures of plane cakes to get a general idea of what I liked.

After I had the shape I covered it with roll out icing, I thought this would be a good look, but it didn’t end up right. So I then covered it with buttercream icing, and smoothed it with a hot knife. The wings are from white chocolate, coloured with normal food colouring. I found that when you mix food colouring into the chocolate it went into a paste type texture.

I found a picture of a plane cake that I really liked on the internet and copied that mostly for the face. I made this all out the rolled icing.

Putting it all together i got the result you see in the pictures.

This is my third birthday cake I have made, I made two for my sons first birthday. Hope you like it. Everyone thought it was fabulous! 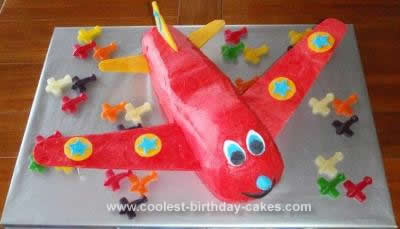