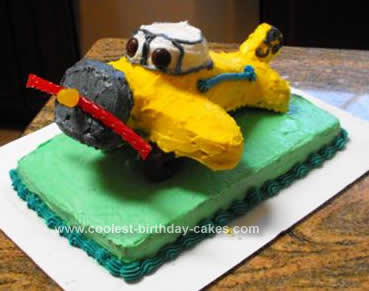 I made this Homemade Airplane Birthday Cake for my son’s 1st birthday and was really pleased with the result. I got it in my head that I wanted an airplane cake so went online for ideas but was disappointed when all I found were jets or commercial planes on a cake board. So I found a picture of a toy plane on another site (www.andreasrecipes.com) and took it from there.

I set out to make an airplane cake of that toy plane – biplane on wheels with the nose propped up resting on sheet cake. I used a 9×13 sheet cake and a small plastic airplane cake pan for the plane. I used the leftover batter for cupcakes. I frosted the sheet cake first, froze it, then moved on to the plane. Because I wanted more of a biplane look, I attached 1 cupcake to the top of the plane cake between the wings as the cockpit. I attached another cupcake to the nose again with a skewer. I inserted skewers through the length (nose to tail) of the plane and also width (from wing to wing) to add stability to the cake.

Then I frosted the airplane and froze between sections, colors. I wrote CNR01 on the wing and tail for my son Connor and 1st birthday. I then added a red vine and a dot to the nose of the plane for the propeller and stuck 2 small donuts underneath the front for the wheels. I used 2 junior mints on the windshield for the eyes. I kept the cake frozen for a day or 2 and pulled it out and put the airplane on the sheet cake just before the guests arrived. It turned out great! I was SO afraid the plane part would fall over or sink into the sheet which it probably would have over time. If I were to make this again I would probably make the airplane out of Rice Krispies and frost just as a cake. 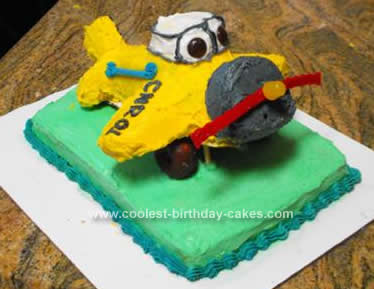