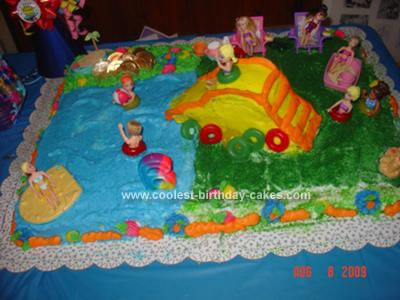 My daughter loves Polly Pocket so I said I would make her a Polly Pocket Birthday Cake .I started off with 4 white cake mixes, put each cake mix in its own bowl and then added a different neon food color for each cake mix. I spooned each color in different parts of the pan. I made 2 cakes like that & put them together.

I also made a round cake in a casserole dish and cut it in half to make the slide. I iced the whole cake white and the icing is all whole made. To get the blue water I used blue candy sprinkles, I think the flavor is blueberry.

The grass was Christmas sprinkles. The flowers were made a week earlier so they would be hard like candy. Well, now I needed floats for the Polly pockets, that would fit them so I washed the sugar off the round candy’s, that worked great. I then picked out a bunch of my daughter’s Polly, after they were washed of course & put them on the cake.

The last touch was treasure island. To say the least my daughter has told everyone that they should have seen her cake it was awesome. Happy 6th Birthday Marissa August 2009