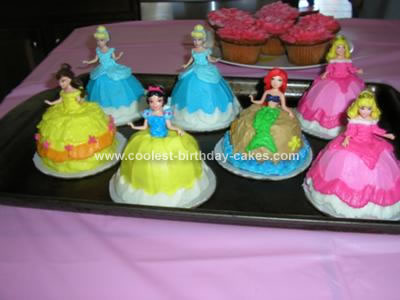 These are disney princess cupcakes I made for my nieces birthday. I used regular cupcakes turned upside down. I put a little frosting on the cardboard circles to make them stick to the board. I then frosted the cupcakes with a butter knife, I started at the bottom and made a stripe upwards and worked my way around the cupcake(making the seams in the dresses for snow white, sleeping beauty and cinderella). Then using a rose tip I piped a white border around the bottom of their dresses. Using the same tip I piped a ruffle around the bottom over the previous piping. I used the disney Favorite moments dolls for the bodies and just pushed them into the top of the cupcake. Using a small round tip I piped on the tops of their dresses and any design I wanted on the dress itself. Then for ariel I frosted the cupcake in brown for the rock and stuck the doll in the center, then I just piped her tail and her bathing suit. I used a star tip to pipe waves along the bottom. For Belle, I started her the same as the other three princess, but instead of piping a white border around the bottom, I used a rose tip and piped the same color edge and then ruffles all around, starting at the bottom and going up. I piped a slightly more golden color around the middle of her dress on top of the other ruffle. I piped on the top of her dress the same way I did the others. Finally I added little pink roses on her dress using a small star tip. I was very surprised at hw fast I finished them and they were surprisingly not to difficult. You can give the dolls away as party favors or wash them off and use them over and over again. Hope this gives you ideas.