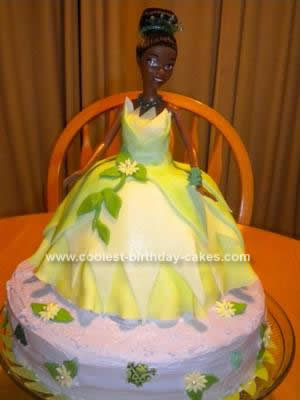 I have always seen doll cakes but wasn’t really able to find any ideas for Princess Tiana since she is so new. After studying many pictures of her dress I decided to give it a try and this Princess Tiana Birthday Cake was my result.

I used the Pampered Chef Classic Batter Bowl to get the right shape for her skirt. The cake ended up a little overcooked because of the thickness of the center… I think it would have been better to use the Wilton Doll Cake Pan because it has a rod for the center to promote even baking and is a deeper pan than the batter bowl.

I could only find the Princess Tiana Barbie doll so I had to find a way to cover her feet since the skirt was not long enough on its own…so I baked a 10” single round cake making a fairly thick cake. Once cooled, I cut the cake in half with a cake leveler to layer the cake and put a raspberry filling between the layers. Using frosting I connected the skirt to the round cake.

Next I did the crumb coat and allowed the cake to chill. Then I frosted the cake with a thin layer of white Wilton’s butter cream frosting on the skirt and a thicker layer of lavender butter cream on the round cake. Then I inserted the doll into the center of the cake.

Creating the fondant dress was the most time consuming and difficult part. I did three layers due to the layering of Tiana’s dress. The first skirt was the easiest. I rolled out a pale lime green colored fondant to about 1/4” thick and using a large bowl as my stencil I made a circle…cut a hole in the center and slip over the head of the doll. I made another circle using a pale yellow fondant for the next layer of her dress. Using a knife I cut the edges of the skirt to give it the pointed hem line and slipped over the doll. Then using smaller pieces of the yellow fondant I cut small triangles for the bodice and pressed them onto the doll.

The last layer was the most difficult and I wasn’t able to find a way to do it in one piece so I did half of the skirt and bodice and then created a matching one for the other side with a medium green fondant. Once laid onto the doll I pressed in the waist line and used a smoothing tool to smooth out the waistline and the seam at the back of the dress. I used a small amount of water to adhere the fondant where needed using a small paint brush (one I had bought specifically for cake decorating). As a final touch I used another paint brush to add Pearl dust onto the dress given it a nice sparkle.

Using a small flower and another leaf cookie cutter I cut out the remaining shapes for decorating the cake and dress. Small pearl head pins were used as the center for the flowers and I rolled out fondant for the vine. Once again using a very small amount of water brushed onto the back of the leaves to apply to the dress and the smoothing tool to help blend the leaves into the vine.

The little frogs on the base of the cake were actually buttons because I was trying to save some time.