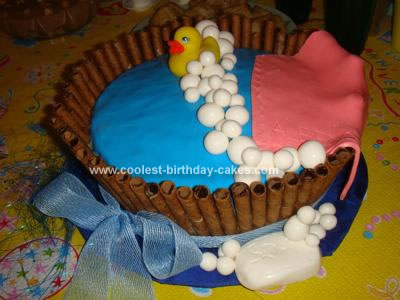 I’d like to say the idea of this Rubber Ducky Cake was just mine but I totally copied off this site! Having said that I wanted to work with fondant for some time and I think this is pretty good for the first attempt. I used 2 cake spring-form pans. One a little larger than the other, I baked 2 pound cakes as this is denser than the average cake and will take the weight of the fondant and decorations. I stuck cut-off straws in the base cake (smaller cake) to make it sturdy, then iced it with whipped cream and put in crushed wafer biscuits then stuck on the (larger cake). This sounds wrong but its to make the cake look like a bucket.

All the websites said use buttercream to let the fondant adhere to the cake but I wanted a little oomph so I melted white chocolate (be generous) into the buttercream. I was working in humid conditions so had to keep sticking the buttercream into the fridge. So then iced the cake stingily (so as not to make a mess)and stuck it in the fridge for 25 mins then rolled out my fondant (which I had tinted 8 hours before) and to about 1/4 inch thick and lay it on the cake.

I smoothed it out bottom to top, sounds weird but helps cake to not crumble then I stuck the cigar shaped biscuits all around and pressed it gently into the cake, had to use buttercream on the biscuits and then tied a ribbon around it to keep it in place and make it look fancy. Then rolled out the pink washcloth and lay it on the side of the bucket and put on the duck (rubber ducky new and washed) and white bubbles (white fondant rolled into balls the previous day and stuck in the fridge to harden).

Was fun but time consuming. Would say humidity is a killer but at the end of the day my daughter was thrilled and I got tons of compliments!