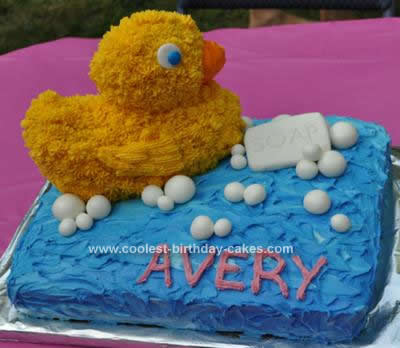 I made this Rubber Ducky Cake for my daughter’s first birthday. I decided on a rubber ducky theme and wanted to make an original cake. Borrowing ideas and suggestions from other submitted cakes I created this.

I started with a two layer yellow sheet cake (11×14 – each layer used one boxed cake mix) with chocolate filling. I frosted this with store bought vanilla icing tinted with Wilton’s Royal Blue coloring and created waves by using a spatula. The duck was made by using Wilton’s duck cake pan. I used a vanilla cake mix and added a box of vanilla pudding and an extra egg to help make the cake more dense to sustain the shape.

I frosted the duck according to the directions enclosed with the cake pan. The eyes were made from rolled fondant and a blue M&M. The bubbles and bar of soap were sculpted out of fondant a few days before the party to help make them more stiff.

The cake was a definite hit. All the kids and adults loved it and had to try a fondant “bubble”. I did make two practice cakes of the duck before the party to make sure that it came out right. The first two did not rise and fill the top half of the mold giving it a rather odd appearance. By adding the pudding and egg it seemed to do the trick. 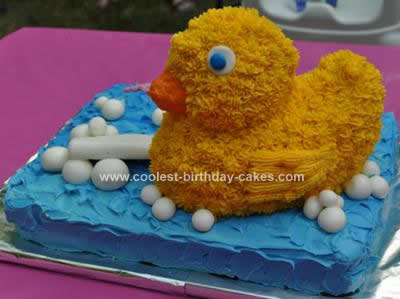