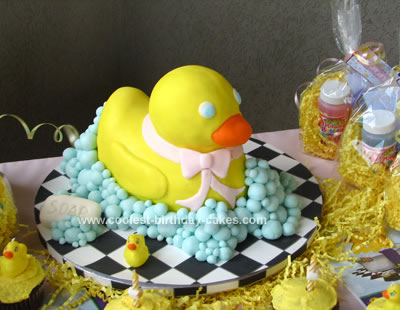 I used a cake mix and the Wilton 3D ducky cake pan for this Rubber ducky cake. After baking it, I noticed that the cake did not expand to fill the whole pan. That made it a little lopsided, so I trimmed it to make it look more proportional.

I made this cake for my daughter’s first birthday a couple of years ago. I used the Wilton 3D ducky pan. I used a buttercream frosting for the crumb layer. Then I found a recipe for Marshmallow Fondant online and used that so that it would look more like a “rubber” ducky.

I started with the head first, just rolling out a large circle and smoothing it down all around. Then I rolled out a large circle and cut a piece out so that I could wrap it around the body of the ducky, kind of like wrapping a bath robe around. That did create seam down the front of the ducky, and there were some wrinkles around the neck area from the piece that covers the head, so I made the pink bow and that covers up a lot of the problem areas.

I cut the yellow fondant off of the beak and put orange on and then I used the cake pan as a mold for the wings. I pressed the fondant in the mold to create the look and then cut around the outline and “glued” them onto the body of the ducky with water.

I rolled a bunch of little blue balls out of fondant for the bubbles. One thing that made this faster was that in the areas where there are a lot of bubbles I just piled up a blob of blue fondant and then covered that with the “bubbles.” That way I didn’t have to create quite as many of the bubbles, but it still gives the appearance of a bunch of bubbles.

The little bar of soap was also made out of fondant. I just made a rectangle, rounded the edges and then carved the word “soap” into it.

It was a lot of fun though and I liked the way it turned out.