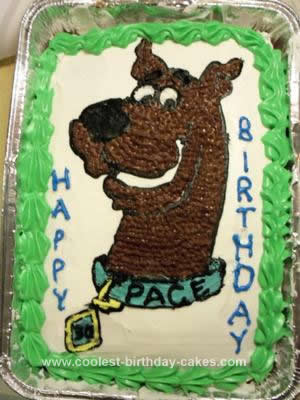 One of my coworkers said her boyfriend’s 30th birthday was coming up, so I offered to make her a cake for him. She couldn’t really decide what she wanted me to put on his cake. I told her that I had a Scooby Doo template made up and she said that would be great because he loves dogs. So we went along with that and she told me the specific colors she wanted on the cake and just told me to be creative.

I made the cake (I can’t remember what flavor) and I traced the Scooby Doo face that I had printed out on the computer from an image site, (i.e., Google) on on a sheet of wax paper with some black icing in a tube. I had to reverse the image on the computer with an image editing site so it would go the right way on the when I layed it face down on the cake. But before laying it on the cake, I put the transfer in the freezer to make it hard.

Once the cake cooled, I carefully layed the transfer face down on the cake. Then I started piping away! I covered the cake as evenly as possible with white vanilla icing. Then I used the star tip with chocolate icing on Scooby to make him look furry. I mixed the necessary icing colors with vanilla icing to make the coordinate colors (such as turquoise & yellow) for the collar.

I used the very tip of a butter knife to get in the small spaces. I thought it would be cool if I put his age on the tag of the collar where the “SD” usually is for Scooby Doo. She wanted his last name somewhere on the cake so I thought of the clever idea to put it on the collar.

From my experience, always be sure to have enough icing and to have your icing at a medium consistency while using tips.

I enjoyed making this cake and was pleased for the way it turned out. My co-worker loved it and her boyfriend loved it too. Good luck in making your Scooby Doo cake!