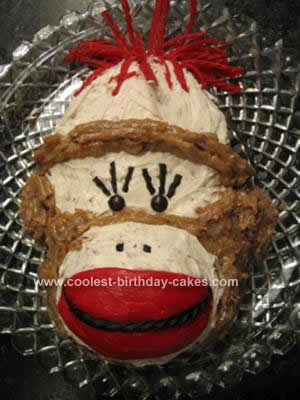 Buy any brand of German Chocolate cake mix for this Sock Monkey Cake Design. (The color of this flavor cake is closest to the Sock Monkey sock color in case you get crumbs mixed in with the frosting). Bake it in two 9″ round cake pans (or one 9″ round and a 9″ square Pyrex, which is what I did because I only have one round cake pan.) Let the cakes cool.

Take one of the round cakes and carve it into the Sock Monkey’s head (without the hat, which will be cut from the other cake). Make the ears as part of the head shape so you don’t have to try to attach them separately. Make the head slightly oval shaped and just carve out the “negative space” around the ears and chin and top of face. You can *very lightly* trace out your shape guideline onto the cake before cutting with the tip of a knife, or make a paper cutout to lay on top as a template.

From the second cake you will then cut the 3-D roundish mouth shape. Chamfer/level the edge of the mouth with the knife so that it becomes a dome shape. Next cut out the hat shape from the second cake. Match the curve of the top of face with the bottom of the hat so they fit together.

For the brown frosting use storebought canned caramel pecan frosting. This flavor is kind of chunky looking and nicely simulates the brown sock texture look. For the light color of the sock use storebought canned “cream cheese” flavor frosting, this flavor is more of an off white color rather than stark white. For the red lips, get a package of red squeezable cake icing (available in the same aisle as the canned frosting).

Attach the mouth shape to the base of the cake with a bit of frosting as “glue”. Frost the brown and light areas of the face and hat. For the hat band put some of the brown frosting into a plastic sandwich bag and cut a small piece off one of the corners so you can squeeze it out and use it as an “icing bag” to pipe on the hat band. Draw the lips on with the red icing and smooth it out. The red icing I bought did not come with a frosting tip, but the hole in the top was the size of a toothpaste tube and I was able to draw the lips on and fill it in with lines of the icing. The red icing was very thick so to blend the lines I just wet my finger and smoothed out the lines to make the mouth appear as all one piece. You could probably also use tinted marzipan for the mouth.