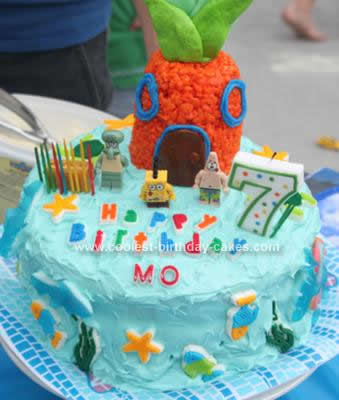 For Mo’s 7th birthday he wanted a SpongeBob Cake Design. He had a Lego cake for his 6th birthday and because he still loves Legos, he also wanted Legos on his cake. We decided to use both because he had a Sponge Bob Lego set.

I made a layered cake and frosted it with light blue frosting. I also made some Rice Krispee treats and dyed the marshmallows bright orange and filled a coffee cup with the mixture. We let it harden and then Mo attached it to his cake with a wooden skewer. I added green Laffy Taffy and airheads to make the pineapple leaves and made the windows with blue frosting.

The door is made from fondant which was dyed brown. Mo then added his Lego Mini-figures of Sponge Bob, Patrick Star and Squidward. I had a package of sugar letters and another of sea creatures that Mo added. He also attached blue gummy using toothpicks to hold the sharks. He kept the fun going, adding a Lego treasure chest “guarded” by more toothpicks.

The finishing touch was his #7 candle & we called it good! He was quite pleased since he had decorated the cake himself and he enjoyed telling all of his friends at his party. They were quite impressed and it was so simple!