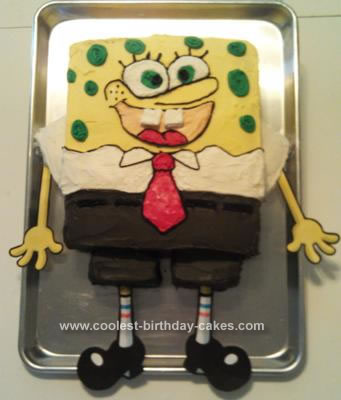 I planned to make my grandson a bunny cake (a la Baker’s Cut-up Cakes from the 1960’s) for his 2nd birthday, but his mom and dad said he’d like Sponge Bob better. So I searched websites and found this one, which inspired me! I’m pretty adventurous when it comes to decorating cakes, so I wasn’t intimidated by Sponge Bob – just excited.

I found a good example of a Sponge Bob cake and traced over it in Photoshop to make it mine. Then I printed it out and gathered all my Wilton colors, tips, and frosting bags. I bought tubes of black icing and red icing so I wouldn’t have to mess with tinting those colors – red is especially tough, and I didn’t need much for Sponge Bob’s accents.

I baked two 13×9″ cakes, using two cake mixes (one for each cake). I leveled them and froze them to make them easier to ice. IMPORTANT: Level first – the Wilton cake leveler doesn’t work very well, if at all, on a frozen cake.

With one frozen layer on top of the other, I cut off about 3″ of the bottom edge and set it aside. I mixed together two tubs of white ready-made frosting. I put a glob under the first layer to keep it from slipping on the pan. I frosted it, then laid the second layer on top.

I tinted about a cup of frosting yellow and covered the “head” part of Sponge Bob. I used white frosting to pipe and then smooth his shirt and shoulders (his shoulders were one-layer wedges cut from the 3″ trimmed off earlier). I tinted another 3/4 cup dark brown (I actually used up most of the leftover yellow by putting Wilton brown and black in it) for the pants. His pant legs were one-layer blocks cut from the 3″ leftovers and “glued” to the main cake with frosting, just like the shoulders.

I used a toothpick to trace his facial features and a round tip to pipe his tie and larger features, tinting as necessary. I finished by outlining and adding final details in black.

Finally, I printed out a large picture of Sponge Bob and scissored out his arms and legs on regular paper and stuck them into the cake. It worked better for me than trying to make them out of cake, and I think it looked good too.

Cameron loved his Sponge-Bob cake, and we got some great pictures of him with it. And it tasted great! 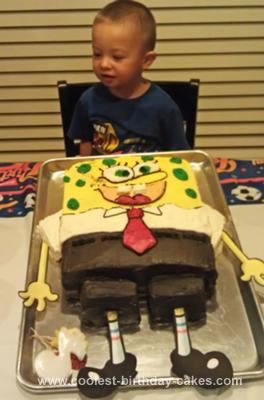