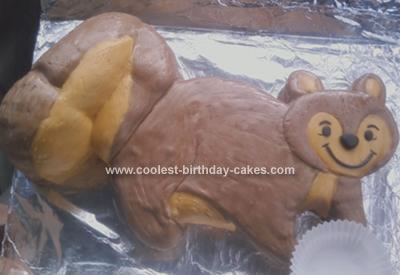 This squirrel cake was daughter’s 3rd birthday cake. She loves squirrels and asked for her cake to be the one from the Curious George TV show. I used an image I found online as my inspiration.

The cake was 2 box chocolate mixes in a 1/2 sheet pan. The entire cake was free form. The body and face is one layer cut to shape. The tail is actually four pieces of cake. The part of the tail closer to the body is 1 and 1/2 layers. I thinned the top layer to make it just a bit taller than the body. There is an indent between the top and bottom of the tail to accent the bushy bottom part which is 2 layers.

After sculpting and arranging the layout, I laid down a layer of chocolate canned frosting. I added extra frosting on the head to raise it a bit above the body.

I made the fondant icing with a large container of Marshmallow fluff, powdered sugar, a bit of milk and vanilla extract. I separated a tiny bit and colored it with black paste coloring for the eyes, mouth and nose. I then separated out two pieces of frosting and colored one with ivory coloring for the light brown and the other with cocoa powder and melted chocolate for the dark brown.

I cut the fondant into pieces for the various shapes. The body and face has one large dark brown piece with a cutout for the light brown layer for the underside of the squirrel. Each ear was covered separately. Half the tail was covered with one light brown piece and the other half in dark brown. The edges between the colors were brushed with water and rubbed to blend. I used a knife to indent a line at the back leg to separate the body and leg. The whole cake was brushed with water and a fork was raked gently across it to add “fur” in the directions that the fur would actually fall. This also helped distinguish the different parts of the tail. The eyes, nose and mouth were all formed from the black fondant and stuck on with a tiny bit of chocolate frosting.

Final touches included eyelashes painted on using black gel icing and a cupcake liner between his hands. I filled the cupcake liner with berries at the party since that’s also something she loves.

It was a huge hit at the party! Which made it very difficult to cut into.