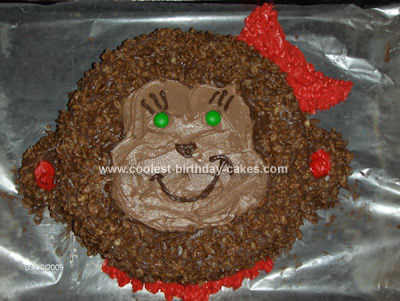 My daughter wanted a monkey birthday party for her 5th birthday so I looked around for ideas and found lots of inspiration on here for a Monkey Face Birthday Cake. I used a boxed chocolate cake mix for this cake. What I did is make one round 9 inch cake and 12 cupcakes with one box of cake mix. For this monkey face cake, I used only the round cake and 2 cupcakes for decorating.

I bought 3 tubs of icing, 2 chocolate and 1 vanilla. While my cake was in the oven, I mixed the vanilla and one of the chocolates in a big mixing bowl to get the lighter brown for the face color. Since I don’t have a big flat box or pan to carry the cake in, I took a large cookie sheet (this one has a 1 inch rim around it) and lined it with wax paper. I actually made the wax paper longer than the pan on the sides, and then I taped it on the underside of the cookie sheet so it would stay in place. While the cake was baking, I took some paper and practiced drawing my monkey face, until I got one I liked. Then I drew this on a 8 X 11 piece of paper so I could have it right next to me while I was decorating the cake.

To shape the face, I put the round cake on my lined cookie sheet. I took a toothpick and dipped it in the light brown icing and gently drew the basic outline of the face on the cake. I carefully frosted this face section with the light brown frosting. Then I carefully frosted the rest of the round cake, including the sides, with the darker chocolate icing.

To put the ears on, I cut a little curved section off the 2 cupcakes so they would fit right up next to the round cake. I think I would put the ears a little higher if I did this cake again. I tried to put the ears near the round parts of where I drew the bumps for the cheeks, and I think next time I will put the ears right where the eye section ends and the cheeks section begins. (If you put them too high, it will look like a bear). Since the round cake was already iced, I just gently pressed the ears on. Then I iced the ears with the dark brown icing, too.

To draw the face, I took some of the dark brown chocolate icing (several tablespoons) and put it in a Ziploc bag. I cut a tiny bit off the corner and used this to draw on the face. I did have a plan to make oval eyes for this monkey, but my daughter decided she wanted green M & M eyes, and that turned out really cute. Since it was a girl monkey cake, I made 3 lines for the eyelashes. For the nose, I made a little upside down triangle and filled it in. I made one side of the smile come up higher than the other to give the monkey a mischievous look.

I was going to put the light brown in the ears, too, but my daughter wanted the red. I used red decorator cupcake icing to put red on the inside of the ears. To get the textured fur look on this monkey, I used Cocoa Krispies and gently pressed it all around the face first, then over the rest of the round cake and ears (around the red). The cereal basically goes everywhere there is dark brown icing. This part can get sticky :). If I were to do this cake again, I would wait until the last minute to put the Cocoa Krispies on because they got a little chewy. I would also use Cocoa Pebbles because I had forgotten my family likes these better :).

I was going to put a red icing bow on the monkey’s forehead but couldn’t figure out how to do it because I wanted a big bow, so I ended up making the bow right on the wax paper, right up next to the cake. First I made a little square for the middle of the bow, and then I made the triangles on each side for the rest of the bow. I also added a red necklace to the monkey’s face on the bottom, also right on the wax paper.

My daughter was so excited about this cake.